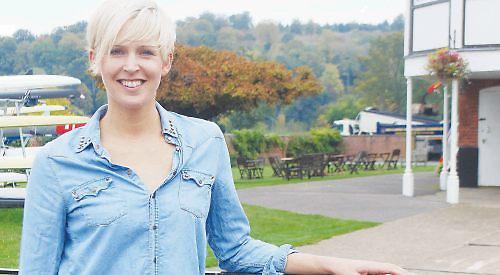 THREE rowers who have won Olympic medals are among the nominees from the Henley area in this year’s Sue Ryder Southern Women of Achievement Awards.

Sarah Winckless, Vicky Thornley and Miriam Luke are all hoping to win the woman of achievement in sport category.

SARAH WINCKLESS, who was made Henley Royal Regatta’s first ever female umpire in 2016, has been nominated anonymously for her years of dedication to rowing.

She grew up in Hamilton Avenue, Henley, and attended Rupert House School.

She won bronze in the women’s double sculls at the 2004 Olympics in Athens and gold at the world championships in 2005 and 2006 with the GB women’s quad.

Winckless, 44, had an interest in athletics as a teenager but didn’t get into rowing until she became a student at Cambridge University.

She was selected for its development crew for the 1995 Boat Race in Henley and became “hooked” on the sport after her crew beat Oxford against all expectations.

Soon afterwards she was diagnosed with Huntingdon’s disease, an inherited condition that progressively worsens over time and causes a range of physical and cognitive impairments.

She competed in the double sculls at the 2000 Sydney Olympics but was placed last in her heat due to an earlier injury.

At the Athens games four years later, she and her partner Elise Laverick recovered from a shaky start with a final burst to the finish to take bronze.

After retiring from the sport, Winckless became the first chairwoman of the British Olympic Association’s athletes commission and started umpiring.

She served as the national chef de mission, running the UK team for the Youth Olympic Games and in 2012 she was asked to become a steward of the royal regatta, where she had won eight times.

She commentates on races and has been working with the regatta’s broadcasting team since live coverage was introduced in 2015.

She served as Team England’s chef de mission for last year’s Commonwealth Youth Games and will take the role again for the 2018 Gold Coast Commonwealth Games.

Winckless, who now lives in Hurley, also sits on the board of the UK Anti-Doping Agency and is heavily involved with Huntingdon’s charities. She was made an MBE by the Queen in 2015 for services to sport and young people.

She said: “It’s a real privilege for me to be nominated for this award. I feel incredibly lucky that I’ve been able to do some really interesting and different things with my life so to be recognised in this way is unexpected but very much appreciated.

“There are some very deserving candidates and I think Sue Ryder is a phenomenal institution. It does amazing work with Huntingdon’s patients and offers fantastic support to those who need it. It’s a great organisation to be associated with.”

VICKY THORNLEY, who is one of three vice-captains of Leander Club, has been nominated by the club’s press and publicity officer Robert Treharne Jones.

She won a silver medal in the double sculls with Dame Katherine Grainger at the Olympics at Rio in 2016 and last year won a gold medal at the European championships.

Thornley, 30, a former showjumper and model originally from Wales, took up the sport in 2007 after being discovered during UK Sport’s Sporting Giants talent-spotting scheme and then selected from 3,500 applicants to join British Rowing’s Start programme.

She was the first graduate of the scheme to win a medal when the GB women’s eight took gold at the world under-23 championships in 2009.

In 2010, Thornley made the GB senior team and moved to Henley to join Leander Club, where she met her partner Ric Edgington, a fellow Olympic medallist who has now retired. She was part of a GB women’s eight that was placed fifth at the London Olympics in 2012. The crew’s performance at Dorney Lake was hampered by illness and injury during training.

But four years later, she and Grainger — Britain’s most decorated female Olympian — won silver in Brazil, only losing out on gold after being overtaken in the final stretch by the Polish double scull.

Thornley, who lives in Bix, is now in winter training but will be competing in the women’s eights Head of the River Race in London in March.

She said: “In some ways Rio feels like a long time ago because I celebrated in the moment then took four months away to have a break, reflect and appreciate the experience. However, once you get back into training there’s a new Olympiad to focus on and that becomes the goal.

“It was a great achievement that gave me more confidence and, of course, you can reminisce from time to time but now it’s all about looking forward to Tokyo in 2020.

“I am really happy that Robert put me forward for the award — it was completely unexpected but a real honour.”

MIRIAM LUKE, who was appointed chairwoman of Henley Women’s Regatta in 2012, has been nominated by Anne Buckingham, a volunteer at Leander Club and a former women of achievement nominee.

Luke, 53, of Chiltern Close, Henley, has overseen a 40 per cent increase in entries to the event with more than 1,800 athletes competing last year.

This summer, the regatta is to overhaul its competition structure to provide a pathway for girls and women from junior to elite.

During her time at the helm, Mrs Luke has grown the volunteer and leadership team and made more accommodation available for visiting rowers. She also oversaw the introduction of live video broadcasts over the internet in 2013.

She took up rowing while studying at the University of Southampton and was one of just 507 competitors in the first Henley Women’s Regatta in 1987.

She won silver in the women’s double sculls at the 1997 world championships and gold the following year. She also won silver at the 2000 Sydney Olympics as part of a women’s quad with her younger sister Guin Batten.

The mother-of-two, whose husband David is a teacher at Chiltern Edge School in Sonning Common, is also a steward of the Henley Royal Regatta.

She said: “There are many more worthy women doing great work in the world but I’m pleased to be nominated as the awards are a good way to raise money for an extremely worthy cause.

“The women’s regatta has grown massively thanks to our volunteers’ contributions and it’s very much a group effort. They work hard to make it a success, not just as a rowing event but for the whole community through the crew hosting programme.

“It is a huge commitment when you consider that they have to balance this with family lives and their jobs.”