Musical shows why 'our Cilla' really was a national treasure 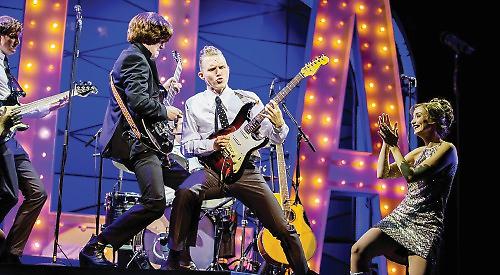 SOMETIMES it seems as though there are enough national treasures to fill a small phone book but Cilla Black had a real claim to that often overworked title.

Her appeal reached across the generations, from those who remember her big hits in the Sixties at the dawn of the Beatles era to her successful career revival more than 20 years later when she became the host for two very long-running TV shows, Surprise Surprise and Blind Date.

In that time she morphed from chirpy Liverpool songbird to the nation’s aunt — no-nonsense but funny and approachable.

Now, three years after her death, Jeff Pope has developed his television miniseries about Cilla’s rise to stardom into a full-blown musical.

To see it is to be reminded not just of powerful hits such as Anyone Who Had a Heart, Alfie or You’re My World but of early numbers from the Beatles and Gerry and the Pacemakers, and even California Dreamin’ by The Mamas & the Papas — fellow guests on The Ed Sullivan Show when Cilla was trying to break into the US market.

Cilla the Musical also summons up a lost Liverpudlian world where 30 bob a night was the going rate for a gig, where even upcoming stars had to wait outside a red telephone box for a call from their manager giving the chart-topping news, and where marrying across the Catholic-Protestant divide might lead to being ostracised from the family.

Family was always important to Cilla White, as was. The “Black” came about after a newspaper misprint and was seized upon as a more commercial name by Brian Epstein, who took her on as his only female client and who grew very close to her.

The feeling was mutual. Part of the storyline in Cilla the Musical rests on the rivalry between Epstein and Bobby Willis — the singer’s early manager, long-time bag-carrier and eventual husband.

The devotion of Bobby, well played by Carl Au, is one of the strongest threads in this production at Oxford’s New Theatre.

Andrew Lancel brings out Epstein’s smoothness and the gay anguish beneath — something referenced by the John Lennon song You’ve Got to Hide Your Love Away, one of several classics reprised here.

Above all, Kara Lily Hayworth as Cilla herself fills the stage with her slender frame and commanding voice. One of 2,000 hopefuls auditioned for the lead in the musical, she shows the same grit and determination that Cilla herself had to display — first of all to make it to the top and then in the equally difficult job of staying there.

Jeff Pope doesn’t shy away from showing that success came at a cost, leading to a fracture in the relationship between Cilla and Bobby, who has singing ambitions of his own.

The couple are only reunited when she sings one of his songs on television. Cheesy, yes, but it works.

The audience knows it’s going to happen, wants it to happen and, to judge by the standing ovation at the end, thoroughly approves of Cilla the Musical.