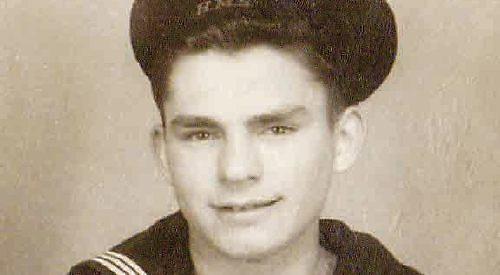 KEN was born in Ealing in 1925 and had an elder brother, Sonny, and younger sister, Barbara.

He attended Grange School before moving to Eastcote where he went to Ruislip Manor secondary.

He left school at 14 and worked for GEC in North Wembley, attending night school to further his studies.

He enjoyed playing tennis with his family at the local club. He and his brother were in the scouts and Ken also joined the sea cadets in Harrow.

In early 1943, he volunteered to join the war effort. After joining the Royal Navy, he reported to HMS Glendower in North Wales only to discover the training “ship” was a Butlin’s holiday camp converted for wartime training!

Ken moved on to Chatham to finish training before joining his first ship in Glasgow as a gunner. The Durban Castle liner was converted into a troop landing ship for the war.

His ship crossed the Atlantic collecting troops, marines and equipment from New York for operations in the Mediterranean.

Other ships Ken sailed in took troops to North Africa and Sicily before the operations at Salerno and Anzio in mainland Italy.

In August 1944 his ship was involved in Operation Dragoon, the code name for the invasion of Provence, which led to the timely liberation of the South of France.

He then served on the Arctic convoys sailing from Scotland to deliver much-needed supplies of tanks, aeroplanes, trucks, tractors, engineering supplies, boots and more to our Russian allies in Murmansk and Archangelsk.

After the war, Ken spent a few years in the Merchant Navy, transporting cargo to Argentina, Brazil and North America before sailing closer to home around the British coast. He joined engineering company Hale Hamilton Valves of Uxbridge in 1949. At this time he was also helping to run Eastwood Social Club in Eastcote, where he met his first wife Janet. They had three children, Tom, Jane and John.

After moving to Cookham in the mid-Fifties, Ken got to work on the garden, planting fruit trees and establishing a vegetable patch. He enjoyed planning caravan holidays and outings for the family but also had a very strong work ethic.

In 1966 he was awarded the British Empire Medal for overseeing Ministry of Defence work contracted to Hale Hamilton Valves.

That same year he joined the Freemasons.

In 1967 he and Janet bought a derelict cottage in South Devon. They worked hard to get the cottage fit to live in while living in a caravan on site.

Very many of the wider family have enjoyed holidays in the cottage at Kellaton since the Seventies.

Many family holidays revolved around Devon and Lannacombe beach, sailing, fishing, crabbing and cliff walking as well as gardening at Kellaton. Ken taught his wife and children to drive a Morris Minor, although the females quite often preferred to walk home before their lesson had finished! In addition to the Highway Code, the “pupils” learned phrases such as “you’ve got enough room to float a battleship”.

Ken and Janet’s marriage ended in the early Eighties and they went their separate ways.

After a while, Ken met Pat and they were married in 1985 and moved to a cottage in Little Marlow, where they worked hard to establish a lovely garden.

Ken and Pat visited different parts of the world for remembrance and war commemorations, including Russia, Italy, Hong Kong, Thailand, Jersey and France.

They attended a reception in Downing Street for the Arctic convoy veterans, a Queen’s garden party and various functions organised by the Not Forgotten Association. The couple also enjoyed travelling with friends on cruises and golf holidays.

Ken was a regular golfer at Bisham Abbey for many years. He continued to be a keen gardener, enjoyed wine making and joined the local Wine Circle. He was a keen swimmer, a good dancer and enjoyed reading and listening to classical and folk music.

It was a very difficult time for Ken and his family when his eldest son Tom died in 2011. The grieving was softened to some extent by the arrival of Ken’s first great grandchild, Tommy, four months later.

In September 2014, Ken and Pat went to a ceremony at the Russian ambassador’s residence where he was awarded the Ushakov medal for his service on the Arctic convoys.

In March 2015 Ken celebrated his 90th birthday with a round of golf and a party organised by his friends at Bisham Abbey followed at the weekend by a family party in Caversham.

In October last year he had the great honour to be appointed as Chevalier in the French Ordre nationale de la Légion d’Honneur for his involvement in Operation Dragoon.

Ken had a full and interesting life but his most treasured times were spent with his family. He took a keen interest in the arrival and news of his grandchildren, great grandchildren, grandnephews and nieces.

He was loving, honest, loyal, strong, passionate, kind, fair, modest and determined but there are no words to describe how much we will miss him.