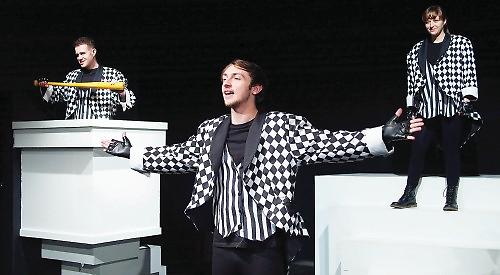 FOR many, the novel A Clockwork Orange is a cultural landmark of the 20th century.

But since it’s a depiction of a violent, dystopian society, it’s undoubtedly a highly controversial text.

It might seem brave of Progress, then, to include this dramatisation, by Anthony Burgess himself, in their 2017-18 season.

Josh Boden is riveting as rebellious gang leader Alex. Alex is a paradox: an amoral thug with a relish for violence, but with a surface finesse apparent in his language, dress, demeanour and love of classical music.

Boden makes a convincing show of Alex’s bravado as he grapples to maintain power over his gang.

But when the gang violence goes too far, Alex is incarcerated in a prison where the institutional brutality is as bad as the gang activity for which he is being punished.

To gain his freedom, Alex agrees to a brainwashing programme to recondition his thoughts and desires, turning him away from violence and self-indulgence.

It works. Alex is a changed young man — meeker and more compliant. But at what price? Debo Bandyopadhyay is excellent as the prison chaplain who queries whether enforced goodness is truly goodness.

The play’s exploration of good and evil is echoed in the stark black and white set design by Tony Travis and in Helen Wernham’s stylish black and white attire for the gang members.

The gang may be feral in behaviour, but they dress well, much like the violent youth tribes of the Sixties, from when this novel dates.

Indeed, youth is the key focus of the play. We are asked to consider the impact on young people of establishment forces: school, religion, government.

What young people might become in a future world is an uncomfortable question raised by this production.

Youth has its own language and this gang uses Nadsat — a slang invented by Burgess and based on a fusion of English and Russian.

The delivery of the Nadsat-infused lines is fluent and enjoyable — but I was glad the programme contained a glossary!

The droogs (gang members) and all other roles are covered admirably by a supporting cast of nine, who work together to give pace and energy to the production.

Inventive use of music adds to the mix: you would expect to hear snatches of Alex’s beloved Beethoven, but dark humour is achieved by the inclusion of a song from the musical Annie, together with other contemporary music.

The violence at the heart of the story is presented in a stylised way. Is it still shocking? Well, yes — but the choreographed movement by David Parsonson rules out any sense of gratuitous violence, allowing instead for a focus on the underlying ideas.

There’s no doubt that the production offers a bleak vision of life, society and human interactions, but this creative, zesty piece of theatre is bound to leave a lasting impression.