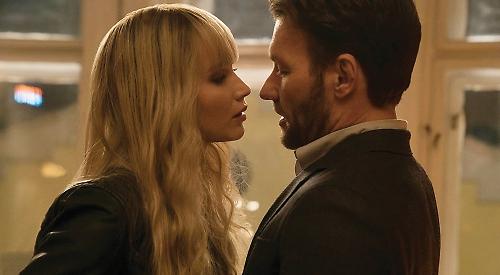 AMONG other things, 2017 can be seen as the year the female action hero finally went mainstream.

Now 2018 is about to deliver another blockbuster movie that proves that women can kick ass just as ferociously as men.

Dominika is a ballerina who is recruited to the strange and brutal “Sparrow School” — a secret Russian intelligence training programme, where she is forced to weaponise her physical prowess.

However, her first mission — to seduce Nathaniel Nash (Joel Edgerton), a CIA officer in charge of infiltrating Russian intelligence — spins out of control and lands them both in mortal danger.

The movie marks a reunion for Jennifer Lawrence and Francis Lawrence (no relation), the director of the last three Hunger Games films.

It was thanks to The Hunger Games that J-Law became one of the most prominent actresses of her generation, so far the only one born in the Nineties to win an Oscar — for Silver Linings Playbook in 2012.

Speaking at an exclusive screening of early footage from the movie in London late last year, the director said: “This is now my fourth film with Jennifer. To see her transform in a brave way and truly push herself into a new territory has been one of the most exciting things about this project.”

Unlike the teen-oriented Hunger Games films, however, Red Sparrow is a thoroughly adult affair with viscerally intense action sequences, a dark tone and more than a soupçon of romance between Lawrence and Edgerton. In true spy film style the spectacular locations took the production all over Europe, including to Vienna and Hungary — and, slightly unexpectedly for its director, to Heathrow Airport for a major fight sequence.

“I was surprised they let us shoot at Heathrow,” he said. “In a post-9/11 world I thought we’d have to cheat and shoot at a convention centre somewhere.”

Fans of Luc Besson’s early films will enjoy the seeming echoes of 1990’s Nikita, but the director is keen to stress that Red Sparrow is a spy story that audiences haven’t seen before. “It doesn’t seem to fall into a category that’s too polarising — the kind of John le Carré political genre or ‘gadgety’ Bond or Mission: Impossible,” he said. “ It’s somewhere in between.”

Red Sparrow is on general release from Friday.