Boy oh boy! Rattigan classic has lost none of its power 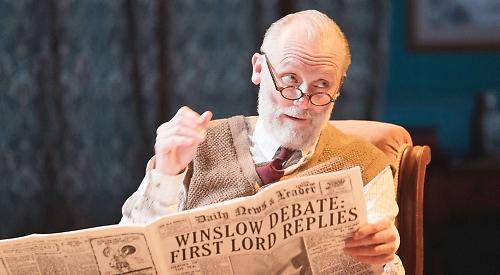 THE plucky individual versus the crushing power of the British Empire at its height: what a great story, especially in the hands of the master playwright, Terence Rattigan.

Director Rachel Kavanagh does this enduring work justice, largely because of warm and appealing performances from Aden Gillett as Arthur Winslow and Dorothea Myer-Bennett as his daughter, Kate.

Theirs is the central relationship in a tale of family loyalty and faith going up against an indifferent military not much concerned with justice. Gillett, particularly, shows a determined love for his youngest son, wrongly accused of theft at his naval college.

Myer-Bennett’s timing and portrayal of worldliness is also something to savour. These two stand out where others play their parts adequately or well.

Interesting also to see Timothy Watson, aka Rob Titchener from The Archers, continuing his national rehabilitation on the Playhouse stage.

His is the role of arrogant but near unbeatable King’s Counsel, characteristics which his voice and facial expressions expressed well but which were not reflected in his physical movement. There is meant to be a stiffness about Sir Robert Morton, but was it wise of the director to get him to move so awkwardly? This is the sort of man who is meant to expand into a room and own it and that wasn’t always evident.

The Winslow Boy has been around for more than 70 years and is based upon a true story from before the First World War. It endures because Rattigan knows how to tell a good story and its theme is universal — the principle of right beyond justice or the law.

Despite the underlying seriousness there is a lot of humour and a feminist subplot involving the Suffragette movement is surprisingly prescient — Rattigan, writing in 1946, sees the future quite well.

The Winslow Boy is one of his most popular plays — perhaps not his best, though; that is more likely to be The Deep Blue Sea. But it is engaging and important and this production recognises that.