How best to fix problem of too few new homes... 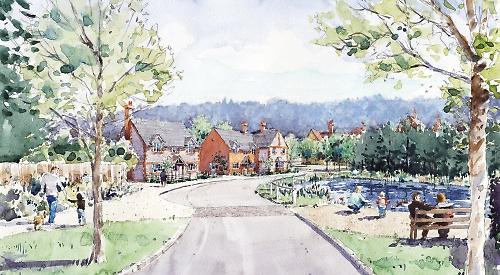 COUNCILS should have more power to compulsorily purchase land and build housing on it, says the man overseeing the delivery of new homes in Henley.

Ken Arlett, a retired building contractor who chairs Henley Town Council’s planning committee and neighbourhood plan group, believes this is the only way to provide enough affordable accommodation for the area’s young people.

He was responding to accusations by Prime Minister Theresa May and housing minister Sajid Javid that planning authorities such as South Oxfordshire District Council are failing to meet the country’s needs.

The Government has threatened to impose quotas and revoke councils’ rights to decide planning applications if they fall behind and instead hand control to a new central agency run by planning inspectors.

The Local Government Association has blamed developers for the shortfall, claiming many fail to act after securing permission because they are waiting for sites to increase in value before selling them on, a practice known as “land banking”.

Councillor Arlett, who was a carpenter in the construction trade for most of his life, says the solution is to allow planning authorities to be able to purchase greenfield plots at the market rate and then build their own homes.

At present, councils can seek the Government’s permission for a compulsory purchase order but may have to pay a higher price that reflects what the land would be worth if it had consent for a private housing development.

Cllr Arlett says developers like Crest Nicholson, which is building 170 houses at Highlands Farm in Henley, are forced to build larger properties to recoup their investment in higher-value land.

This then excludes poorer residents as even “affordable” housing, which must comprise at least 40 per cent of all new developments under planning rules, is still too expensive for many people.

Councillor Arlett, a former Henley mayor who lives in Elizabeth Road, said: “The majority of housebuilders are working at capacity and just can’t meet the demands being imposed.

“I’ve worked for all the major firms, including McAlpine, Bovis, Tarmac and Galliford Try, so I know how complex it is.

“You need everything from surveyors and contractors to the materials and it’s a real logistical challenge. If the Government sat down and spoke with the big developers they might get some interesting insights.

“Developers aren’t going to build houses if they think won’t be able to sell them because they know their cashflow will dry up. If they’re struggling to sell whatever they’ve already built, they will just slow down any ongoing work to reduce their outgoings.

“They pay top money for land with existing permission for housing so they can’t afford to provide anything cheap but at the same time, it takes much longer to sell the larger three- or four-bedroom places.

“There’s also no point blaming the district council as they only have so many staff and if the number of planning applications doubles, they need twice the number of officers.

“I’ve never seen so many applications coming for property extensions, for example, and these things take time to process. The council has got some good officers but they can only do so much.”

Cllr Arlett is overseeing a revision of the joint Henley and Harpsden neighbourhood plan, which names the sites where about 500 homes should go to meet Government targets by 2027. It came into effect after passing a referendum two years ago.

That housing figure will have to increase by about 350 as the district council is updating its own local plan to run to 2033 and is increasing the quotas for most towns and villages. This follows the publication of a report in 2014 which claimed too few homes were being built in Oxfordshire.

The neighbourhood plan’s validity has also been cast into doubt by a planning inspector who allowed an application for 95 homes at Thames Farm, off Reading Road near Shiplake, despite the site not being earmarked for development.

The authority sought a judicial review of the decision, claiming it had a supply of just over four years but High Court judges sided with the inspector.

Other inspectors have since concluded that the council does, in fact, have a three-year land supply but there are still concerns that the inspector’s decision could set a precedent for future rulings.

“I guarantee that most sites that come forward under the new neighbourhood plan will be farmland and the council should be able to snap them up.

“You’d fill the new units pretty quickly as I gather there are about 3,800 people on South Oxfordshire’s housing list.

“There’s a shortage for people on lower incomes while the bigger properties are waiting to be sold. That’s something Theresa May could take meaningful action on and I think anyone with half an ounce of sense would support it.”

Mrs May and Mr Javid’s new targets would be based on various factors including house prices and wages as well as the number of “key workers” such as doctors, nurses, teachers and police officers living locally. Quotas could be higher for areas deemed less affordable.

Mr Javid said: “We have a housing crisis in this country and need a housing revolution. The new rules will no longer allow Nimby councils that don’t want to build the homes their community needs to fudge the numbers.

“We are going to be breathing down your necks day and night to make sure you’re actually delivering on these numbers. At the moment there’s no comeback or sanction and that has got to change.”

The Local Government Association says there are more than 420,000 unbuilt homes with planning permission in England and Wales, up from 365,000 last year, yet councils are approving nine out of 10 applications and the number of approvals has increased to 321,000 from 205,000.

But Henley MP John Howell, who introduced neighbourhood plans under the 2011 Localism Act, says the Government’s proposals would speed up the planning process by standardising the way in which housing need is assessed.

At the moment, planning authorities choose their own methods and this may be challenged by developers, which he says wastes time and taxpayers’ money through repeated planning appeals.

“We need clearer expectations on local authorities and developers to deliver their commitment to unlock land, fulfil planning permissions and provide essential infrastructure.

“We do not need local authorities becoming property developers and confusing their roles as the planning authority and as builders of new houses. This is what housing associations were set up to achieve and they are funded by local government to do just this.

“We do not want councils bearing down on communities to compulsorily purchase land. A standardised approach to assessing housing need will establish a level playing field and give us a much clearer, more transparent understanding of the challenge we face.

“One of the biggest shifts is a change in culture towards a focus on the number of homes delivered rather than on processes such as planning permissions.

“As it becomes easier to make plans more streamlined and strategic, this culture change will encourage local authorities to work together to meet their communities’ needs. Areas will be able to agree their land supply position annually, reducing the need for costly planning appeals involving speculative applications.

“The importance of protections of neighbourhood plans needs to be stressed. We are also giving local authorities the tools to make the most of existing developed land, with an even stronger drive for increasing density, particularly in areas where need is high. This means supporting those councils that wish to build upwards, but not at the expense of quality.

“Developers must also step up to help us close the gap between planning permissions granted and homes built. In doing so, it is vital that developers know what contributions they are expected to make towards affordable housing and essential infrastructure and that local authorities can hold them to account.

“However, we all know of instances of developers making such promises but later claiming that they cannot afford them.

The district council says the average time between permission being granted and housing being delivered in South Oxfordshire is 477 days.

It estimates that 1,257 dwellings on 331 sites are yet to be built despite have permission. Another 4,507 have been granted outline permission.

A council spokesman says: “We are committed to maintaining the right to determine planning applications, as we believe it is an essential part of local democracy.

“The ‘special measures’ for planning authorities have been in legislation since 2013 and we have continued to exceed government targets for this.

“By working with landowners and developers, we do everything we can to encourage housing to be built in a timely fashion.

“The time between the granting of planning permission and the delivery of housing varies according to the scale of development.”