Exhortation to remember them hits all the right notes 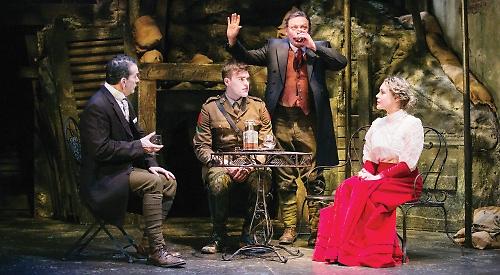 IN a year that will see humanity mark the centenary of the end of the First World War, this stage adaptation of Sebastian Faulks’s novel by Rachel Wagstaff feels like a timely exhortation to remember.

As the horrific events of “the war to end all wars” move from living memory into abstract history, there is a delicate balancing act in depicting wartime incidents on stage, treading a fine line between avoiding the mawkish yet not shying away from the subject matter.

This production was beautiful, harrowing, powerfully evocative and vivid — and served up a gut-punch of trauma, yet in a way that provoked thoughtfulness and reflection.

Innovative set designer Victoria Spearing was on form, having created an eerie and forlorn landscape, comprising a dark backdrop of barbed wire, jagged pieces of wood (including a silhouette of a cross) and broken lands.

Seen through the story arc of young Lincolnshire officer Stephen Wraysford (Tom Kay), delving into his romantic liaisons in pre-war Amiens and the impact of his stay with a French family, the cast flitted seamlessly between events before and during the war — at one point visiting the sheer futility and ruthlessness of the Battle of the Somme.

Both cast and audience alike were jolted and rattled by explosions, with loud bangs and lights jumping out of the claustrophobic darkness, giving the fraught conditions a sense of immediacy and ongoing imminent peril.

Sapper Jack Firebrace (Tim Treloar) is puzzled but relieved when Wraysford lets him off a potential court martial and their fates are to entwine.

The sappers and soldiers’ personal stories and tragedies were told amid an atmosphere of banter and camaraderie, rising above the cramped, dank, vermin-infested living quarters below ground, in the tunnels and trenches.

With solid and passionate performances by all and the use of a fiddle to convey both defiant moments of upbeat singing and dancing and poignant pauses, and neat segues of multitasking roles, this was a masterpiece in storytelling.

As the denouement approached, with the emergence of a fragile peacetime, the line “Never again” was uttered, and we reflected on the characters’ fates.