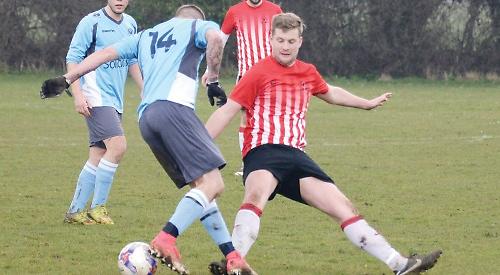 A PENALTY in each half was enough to earn a lacklustre WOODCOTE/STOKE ROW a 2-0 victory at home to BERKS COUNTY in the Premier Division.

The visitors gave their all throughout the match, which was dominated by the two defences.

Woodcote were again indebted to their young keeper, Sonny Wheeler, who made several important saves to preserve a clean sheet for his side while the performance of Darren Russell at centre back also caught the eye.

Berks County were quick out of the blocks from the start with a gameplan designed to upset the pattern of Woodcote’s play.

But it was the home side who took the lead in the 21st minute with Mike Davies converting from the penalty spot after a foul on Jake Dillon.

After that, both sides had chances but both goalkeepers made sure the scoreline remained unchanged at the break.

The second half followed a similar pattern to the first but with Woodcote perhaps exerting more pressure than in the first half, leading the Berks keeper to distinguish himself on several occasions.

Woodcote made it 2-0 in the 80th minute with Dillon stepping up to convert from the spot after Ryan Corbett had been fouled in the penalty area.

The hosts then saved their best move until the last five minutes when substitute James Worsfold found Corbett and his pass was hit first time by Dillon, which produced another terrific save.

Elsewhere, the match that was due to take place between ROTHERFIELD UNITED and COOKHAM DEAN RESERVES was rescheduled due to a fixture clash.

In Division 2, the second visit to Loudwater this season proved lucky for WOODCOTE/STOKE ROW RESERVES who put in a great team performance to come away with a 5-1 win against MARLOW UNITED RESERVES.

The visitors began the quicker of the two sides and took the lead within five minutes when Craig Ancliffe powered home a near-post header from a Dan Offley cross.

Ten minutes later Woodcote doubled their lead when Scott Gesner released Ben Rusher with a quickly taken free kick. Rusher’s early cross was then met by Offley, whose half-volley was curled past the goalkeeper and into the top corner.

Woodcote continued to have the better of the game with the defence of Gesner, Higley, Nathanielsz and Rook looking solid and it was only a matter of time before they scored again.

With 30 minutes on the clock, the game was effectively over when Offley claimed his second goal with a neat finish after some neat approach play by Elliott Harper.

Then Higley should have then really made it 4-0 but he saw his header clip the outside of the post.

Despite the scoreline, Marlow tried to pull a goal back with Olly Flint always a danger upfront but they never really tested Symonds in the Woodcote goal so the visitors went in at the interval 3-0 up and looking comfortable.

Marlow started the second half at a much higher tempo and that pressure unsettled the visitors as their slick, short passing they had been doing in the first half deserted them and they took longer with their decision-making.

This allowed Marlow to break up the play and to stretch the game but it was Woodcote who got the next goal. Rusher beat two men on the edge of the Marlow area before firing in off the underside of the bar.

The hosts pulled a goal back on 60 minutes when Flint fired in a free kick in at the near post and, with 25 minutes to go, Marlow thought they’d got another one, but the linesman flagged for offside, much to the anger of their players. Minutes later Marlow had another goal ruled out for offside and those two decisions seemed to take the wind out of their sails.

Woodcote wrapped up the game on 75 minutes when Matt Turnbull beat his man to a ball in the box and coolly slotted the ball past the keeper to complete the scoring.

In Division 3, WARGRAVE started well against WOODLEY UNITED A racing to a 2-0 lead with Callum Alliston netting both.

Alliston then won a penalty, which was converted by James Pople to put the hosts 3-0 up at the interval.

Wargrave missed several chances after the re-start before Bradley Reaiche scored his side’s fourth from the edge of the box which was followed by their fifth and final strike courtesy of a Tom Bray solo effort.

Deep into stoppage time Woodley scored a consolation goal to end the game 5-1.

The result moves Wargrave up to third place in the league, a point behind Maidenhead Town Reserves in second and two points behind leaders Goring United with a game in hand.

• GORING UNITED RESERVES crashed out of the Berkshire Trophy Centre Junior Cup after a 2-1 semi-final defeat at the hands of BERKS COUNTY ROVERS on Saturday. Chris Searle put his side in front in the 15th minute before doubling his and his side’s tally 15 minutes later.

Things then went from bad to worse for the hosts after they went down to 10 men when Daniel Reynolds was shown a straight red card on 35 minutes.

Goring used all three substitutes in an attempt to make something happen for them and their pressure finally told in the 75th minute when Mark Pearson found the net to pull a goal back but Berks held on for the win.

Berks will face Cintra Park Rovers in the final after they overcame Taplow United A 4-2 in their semi-final.