What lies beneath volunteer badges? 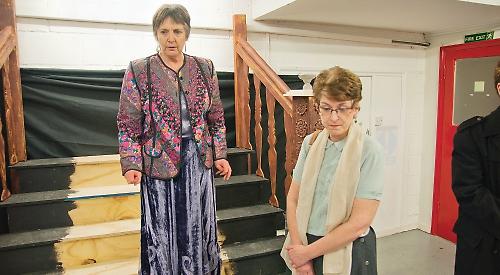 LETTICE Douffet may be a middle-aged oddball but a visit to her basement flat would shock even the toughest, writes Mike Rowbottom.

There they would find a frightening array of implements — for Miss Douffet has unusual hobbies.

And she’s roped in her new friend, Lotte Schoen, to bring them to life.

The Sinodun Players’ production of Peter Schaffer’s Lettice and Lovage at the revitalised Corn Exchange, Wallingford, is rooted in the darkest of humour.

“It’s a hilarious romp through history as this unlikely pair take on the stories in their own way,” says director Julie Utley. “Any more detail would spoil the plot, but it is not what you might expect from two mature and educated women.”

Erica Harley as Lettice and Jay Berry as Lotte take the lion’s share of the play, which moves from stately home to civil service office and finally to the basement of doom itself.

Julie Utley says Lettice is an eccentric who hates the restrictions of being a stately home guide, so she decides to apply her imagination to her accounts to bring them to life.

These become so vivid and colourful that she falls foul of the administrators.

“It’s a really very, very funny play with some terrific lines and ideas. It’s also a bit of an education if you want it, but at its heart it’s about an unlikely friendship between a wildly eccentric woman and her dull civil servant friend.

“One thing comes out of it — how can we ever look at those National Trust house guides again without wondering what lies beneath the volunteer badge?

“And we’re very fortunate indeed to have two of our most talented and experienced actresses taking the main roles. They bring out the warmth and absurdity of these two extraordinary women.”

Erica Harley plays Lettice, a part originally created by and then written for Dame Maggie Smith, with Jay Berry as Lotte.

Lettice and Lovage is the first play to be staged at the Corn Exchange since it closed for major refurbishment and renovation in June last year.

The theatre reopened in January with the annual pantomine, Cinderella, which ran for 15 performances and all but sold out with record attendances.

The arts centre, cinema and theatre, which is owned and run by the Sinodun Players, is at the heart of Wallingford’s entertainment and cultural life, with all the facilities of a professional centre but run entirely by skilled volunteers.

Lettice and Lovage is at the Corn Exchange, from Wednesday, April 11, to Saturday, April 14. All performances start at 7.45pm and the show runs for 120 minutes.