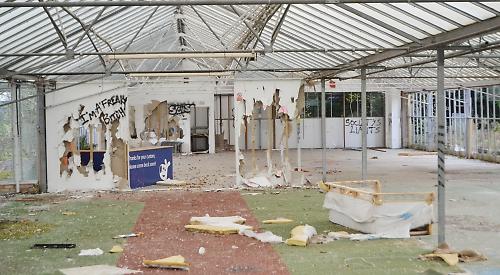 A DERELICT garden centre near Shiplake could be redeveloped for homes and offices.

Aida Dellal, who owns the old Wyevale site, off the A4155 Reading Road,
has applied for planning permission to build up to 40 new houses plus commercial units and possibly a community centre.

The existing buildings, which have fallen into disrepair since the business closed in 2009, would be demolished and a number of overgrown trees removed.

She has suggested building 20 three-bedroom houses, six with two bedrooms and two with four plus eight two-bedroom flats and four with a single bedroom, all in buildings no more than two storeys tall.

At least 40 per cent of the units would be classed as “affordable” with the rents or sale price fixed below the market rate.

All would be built by Adam Architecture, which specialises in classical and traditional homes and has previously designed schemes for the Duchy of Cornwall. There would also be 76 parking spaces, a 1,440 sq m “village green” in the centre of the development and a large building in the south-eastern corner with 500 sq m of office space plus car and bike parking.

Mrs Dellal, who lives at Fawley Court, off Marlow Road, is in talks with Shiplake Motors about the possibility of moving to the site.

The land is earmarked for only commercial use in the joint Henley and Harpsden neighbourhood plan but Mrs Dellal says this would not be viable as market research showed prospective tenants wouldn’t pay even half of the rent required for the scheme to break even.

An independent report commissioned by the district council confirmed this.

Furthermore, although the land has been on the market for almost a decade, there has only been interest from developers looking to build houses or care homes. Mrs Dellal’s agent HGH says the development would help alleviate the shortage of housing across South Oxfordshire.

It says the site is “particularly well-suited” to housing as it sits on a major bus route between Reading, Henley and High Wycombe and is within walking distance of Shiplake station.

It says there would be no “significant” or “demonstrable adverse effects” as the land is brownfield and doesn’t fall within the Chilterns Area of Outstanding Natural Beauty.

An HGH spokesman said: “The site contains a number of dilapidated buildings. It is an eyesore and a magnet for antisocial activity and ought to be brought back into productive use.

“It is clearly not possible to deliver the entire site for employment purposes. A mixed-use development is a far more appropriate and deliverable option.

“The delivery of up to 40 new homes, including 16 affordable homes, will help give local people the opportunity to remain in the local area as well as for people to relocate to the area.”

The land, which is in Harpsden parish, is next door to Thames Farm, whose owner Claire Engbers has been granted permission for 95 homes on the 14-acre plot.

According to public consultation carried out by the company last year, 90.5 per cent of respondents agreed with the principle of redeveloping the site while 59.6 per cent backed a “mixed use” development.

The biggest concerns raised were over possible congestion due to an increase in traffic, particularly in combination with the development next door, and pedestrian safety.

HGH says forecasts show that its proposal would generate less traffic than exclusively commercial or light industrial use.

Kester George, chairman of Harpsden Parish Council, said: “It is a tricky one as we’re currently facing an application for temporary offices at Oak Farm and would prefer to see that built at Wyevale or somewhere similar which doesn’t fall within the AONB.

“The applicant has long argued that a commercial development is not viable on that site but the proposal requires a good deal more thought, which I’m sure it will get in the upcoming revision of the neighbourhood plan.”

Tudor Taylor, chairman of Shiplake Parish Council, said: “We haven’t discussed the application but in principle we oppose residential development because we’re against the loss of an economic site.

“It’s all very well building houses but people will need places to work and this will be taking that away. We’d also like to see their viability calculations as we’re not assured that the site has been adequately marketed.”