Family home for sale after 33 years and two donkeys 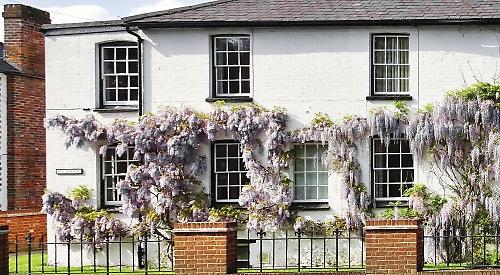 GILES Robinson of Robinson Sherston estate agency in Henley is selling a property on Remenham Hill for the second time in his career.

He first sold Hectorage, a five-bedroom Victorian semi-detached house, to the current owners Peter and Gini Forrester in 1985.

Thirty-three years, four daughters and two donkeys later, the Forresters are now retiring to the coast and have asked Giles to put the property back on the market for them.

Peter showed me round and talked about his years of living here with pride and affection — as a family home, it looks very comfortable and is in good decorative order.

A classic Victorian house laid out over three floors, the rooms are bright and spacious with high ceilings and traditional sash windows.

The lower ground floor is an excellent space for a family with young children.

There is a large well-appointed kitchen with a magnificent view over the garden. The kitchen has a separate utility room and space for a dining table and leads into a cosy snug which was a playroom for the Forresters’ four children when they were young. Up a level, the ground floor has a large, attractive triple-aspect sitting room with double-glazed windows and a study area.

Along with a cloakroom, there are two bedrooms on this floor, with scope to turn one or both into a reception room such as an additional lounge or an office.

On the first floor the master bedroom has plenty of space for storage and an en suite bathroom.

There are also two further bedrooms and a large family bathroom on this floor. One of the bedrooms features an eye-catching stained-glass window — a scene in soft natural colours of a kingfisher flying over a river.

There is ample space for cars to park and turn at the back of the house, in an area that is accessible via a driveway with a gate. There is also a double garage and a workshop with room for another car or boat. The garage and workshop have lights and power, fitted cupboards and a clear roof that lets in plenty of daylight.

The main garden comprises a large lawn with flower beds, mature trees and shrubs. There is a greenhouse, a vegetable patch and an area for sitting out in the sun or enjoying a barbecue.

The garden is plenty big enough for parties — the Forresters have hosted three weddings here in marquees over the years.

Beyond the garden is a fenced paddock, which has tremendous potential for someone with green fingers and an eye for landscape gardening.

When the Forresters moved here in the Eighties there was a donkey called Felicity living in the paddock. She was soon joined by a companion called Poppy.

Living well into their forties, these Remenham donkeys nibbled at the grass to keep it short and enabled the children to learn how to ride.

At the end of the now donkey-less paddock, there is a fence with a gate that leads on to a footpath. The perfect starting place for a country walk, you can meander from here down to the villages of Aston and Remenham, the Flower Pot pub and along the towpath towards Henley or Marlow.

Hectorage takes up two thirds of a row of cottages that were built in the 1890s, when Queen Victoria was on the throne. In those days there were three separate dwellings here, with the middle one serving for many years as a Post Office.

During the Sixties two of the three cottages were knocked through and made into one big home, which is how it is still arranged today.

Hectorage is situated between White Hill Service Station and the Rewind festival office, in what was previously the Five Horseshoes pub. It is conveniently close to Henley town centre, and perfect for commuters needing easy access to the M4 or M40 into London.

The convenience of its location means that Hectorage is on a fairly busy road, but it is easy to forget about that once you’re tucked away inside this pretty home, and the double glazing does a good job of keeping the house quiet.

As Peter and Gini Forrester retire from their jobs at Pipers Corner School near High Wycombe and The Henley College respectively, they have an ambitious renovation project to look forward to when they move to their new seaside home in Kent.

But saying goodbye to Hectorage means a new family will be saying hello — and who knows, maybe the paddock will get a new donkey?