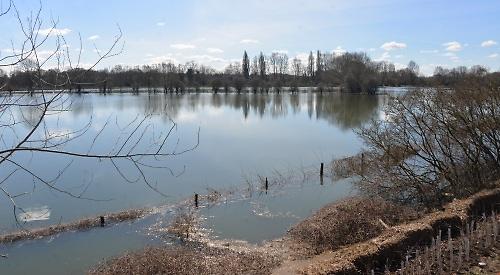 THESE were the scenes as the Henley area experienced the worst floods in four years.

The problem was not as serious this time round but some businesses were still affected.

Water filled most of the car park behind the Flowing Spring pub in Playhatch.

Owner Nick Willson had to cancel a classic car and bike breakfast club he had planned for Sunday and a autojumble sale planned for this weekend.

He said: “People were disappointed because they have been saving up parts, which I’m sure their wives would be happy to see the back of!

“Now that has had to be moved to May as we can’t park on the grass.” Spring Lane, which runs between the A4155 Henley to Reading road and the B478 Playhatch Road, was closed from Tuesday last week until Thursday this week as parts of it were under water.

A temporary lake was created at Playhatch next to the section of the A4155 which was repaired last year after being damaged by previous floods.

Flood warnings were issued for Hurley, Henley, Remenham, Medmenham, Shiplake, Lower Shiplake, Goring, Whitchurch, Mapledurham, Sonning, Charvil and Wargrave as the river burst its banks in a number of places.

Parts of the Thames Path were impassable and large pools of water formed in Mill Meadows and the Henley Royal Regatta site, although these began to disappear over the weekend, which was not as wet as forecast.

Rowers from Leander Club have been forced to train at Dorney Lake, near Windsor, due to the speed and height of the river. Paul Budd, general manager of the club, said: “They are going to be over there until we are satisfied that it’s safe enough for them to come back.”

About 55mm of rain fell between March 26 and Thursday last week, more than three times the average.

So far in April there has been 29mm of rain, two-thirds of which fell on Friday and Saturday.

• Starbucks in Market Place, Henley, was shut on Wednesday due to flooding. Damp carpet flooring panels were left in the street and the windows of the coffee shop were covered in condensation. Inside, staff used bins to catch water falling from above and the furniture was stacked to one side.  A notice in the window said: “Dear customer, due to major flooding we are unable to open the store for the foreseeable future. Sorry for any inconvenience caused.”