Quiet tour de force more than lives up to its name 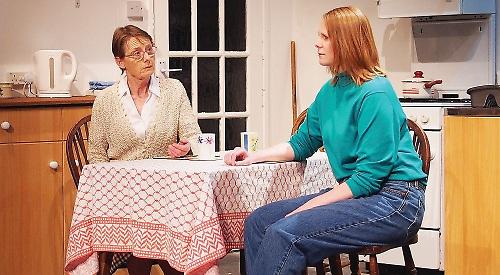 THIS marvellous production of Elaine Murphy’s Little Gem is given wings by three outstanding performances from Tara O’Connor, Steph Gunner and Alison Hill.

The drama shows us the challenging everyday experiences of three generations of an Irish family. Grandmother Kay is caring for her husband of many years, now incapacitated by a stroke. Lorraine is juggling home, job, and family responsibilities as a single mother. Daughter Amber is troubled but is forced to grow up when she herself becomes a mother.

The set initially leads you to think you are watching a standard kitchen-sink drama, but that isn’t the case. What we have here is something far more theatrical and poised.

The three leads take it in turn to step into the spotlight and narrate episodes from their lives that any woman — and probably many men — can relate to.

These intertwined monologues hold the audience’s attention and Steph Dewar’s strong direction ensures that each account flows seamlessly into the next.

O’Connor, Gunner and Hill expertly deploy storytelling and mime techniques to transport us convincingly to a range of scenarios — a nightclub, the workplace, even a sex shop. The script is very funny and the three leads are superbly comical in performance!

Little Gem offers an honest exploration of the place of sex in women’s lives. As Kay misses the physical side of her marriage, Lorraine embarks on a new relationship and Amber discovers she is accidentally pregnant with the “little gem” of the title — a baby boy who brings hew hope to the family. Family is the main theme of the play, with the characters representing women’s roles in different phases of life: daughter, wife, mother, widow.

Domestic drama is shot through with fierce and poignant comedy as the three women’s experiences play out the old adage that you have to laugh or you’d cry, since life is full of ups and downs, hardships and disappointments.

Happiness may be elusive, but it’s not impossible to achieve — as the play’s ending demonstrates.

The three leads play their parts in commanding and compelling fashion, showing the courage and resilience of ordinary people.

I left the theatre brimming with enthusiasm and emotion. This warm and accomplished production is the best thing I have seen in a long while. It’s a quiet tour de force and I urge you to go and see it.

Little Gem is playing at the Progress Theatre until Saturday. For tickets and performance times, visit www.progresstheatre.co.uk/
little-gem