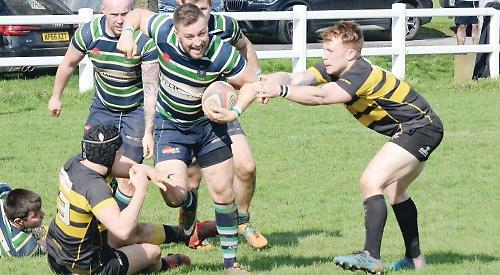 The hosts started positively, with second row Chris Shaw and prop Ollie Charlton both making good breaks but it took until the 37th minute before Abbey broke the deadlock.

Hooker Adam Postlethwaite threw the ball to Jeremy Knights at the front of the line. Gingell broke from a maul, and Bevan, Ross and Charlton combined well before Wallingford were penalised. Second row Connor Murphy was sent to the bin and Gingell converted.

Abbey were then caught napping when winger Pete McKinley took a quick tap, cut through to the right corner, and supporting fullback Dan Sadler crossed the line. Skipper Phil Dawes converted from close to touch, and half-time arrived with Wallingford in front.

After the break, Dampies picked up a loose ball and set off, outwitting the defence over 30 metres. When the ball was recycled, Ross was up in support to run 15 metres to touch down in the left corner but de Marcilla Bahlsen saw his conversion attempt drift wide.

Ben Finnie came on for Shaw after 51 minutes, but he had scarcely been on the field when Wallingford scored another try. Again the creator was McKinley, whose quick tap took him on a 30-metre run towards the right. Centre Sam Botting was up in support, and he made it all the way to the line. Dawes kicked the conversion to lead 14-8.

With 10 minutes of normal time remaining Knights won a line-out ball and a 30-metre maul developed as Abbey got well inside the visitors’ 22. Beckly, Postlethwaite and Daniels all made ground, and when the ball was moved to the right Dampies and Norville got close to the line. Again the ball was recycled, with Bevan and Shaw nearly getting clear, and at last Bevan found a gap after collecting the ball from a ruck. He sprinted over the line and touched down fairly close to the posts. But de Marcilla Bahlsen again missed his kick to leave Abbey a point behind with five minutes left.

Abbey threw everything into attack in a final desperate effort to claim the win. They kept possession with Shackleford, Finnie, Daniels and Collier all prominent. House took the ball well inside the 22, but eventually the ball was knocked on and the final whistle sounded.

Second-placed Windsor away on Saturday will be Abbey’s final game of the season.