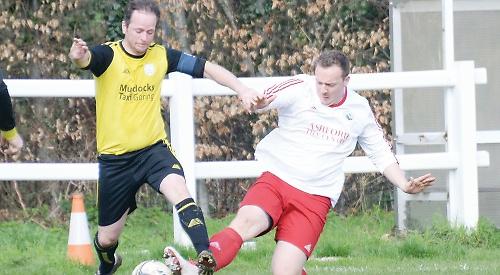 THE juggernaut that is WOODCOTE/STOKE ROW rolled on with a comfortable 4-0 win away at NEWBURY in the Thames Valley League Premier Division on Saturday.

This was not one of Woodcote’s better performances and they were indebted at times to the solid defending of the back three, Mike Butcher, Sam Green and Mark Hughes, but they created and took their chances at vital times.

Man-of-the-match, Sam Tucker was also outstanding throughout in midfield in protecting the defence and breaking up play in attack.

The first goal came after two minutes with Andy Bullett finding the net from a corner.

The second goal came on the half-hour mark with Bullet bagging his second, rounding the keeper to tap in after a good through-ball from Tommy Chapman.

Newbury had a good spell just before the interval and Woodcote were had to thank goalkeeper Sonny Wheeler, who made two very good saves.

Woodcote hit back and might have twice increased their lead before the break but James Worsfold had a header well-saved and Sam Green’s bullet header rebounded from the crossbar.

In the second half, Woodcote made it 3-0 on 54 minutes when Mark Hughes headed home from Frank Dillon’s corner and the scoring was completed in the 84th minute when Ryan Corbett tapped home at the far post from Michael Davies’s pinpoint cross.

The game was generally played in a good spirit but a Newbury player received a straight red card for a tackle on Jake Tucker.

In Division 1, ROTHERFIELD UNITED suffered a 3-0 defeat on their own turf at the hands of RICHINGS PARK.

Ryan Adams, Karl Haggen and John Willmott were the goal heroes for the visitors.

In Division 2, WOODCOTE/STOKE ROW RESERVES enjoyed a morale-boosting 2-1 home win against HARCHESTER HAWKS which should keep them clear of relegation.

Ben Rusher helped himself to both goals against a team who remain fourth in the table. The win gives Woodcote a seven-point cushion ahead of Berkshire County Reserves, who are second from bottom and have played three more games.

They are now just two points behind the next-placed Marlow United Reserves, who have played two more games.

HENLEY TOWN RESERVES went down 3-1 at home to
GORING UNITED in their Division 3 clash.

The hosts rested several players for this match and it was the visitors who applied all the early pressure.

Henley’s wingers of Nico Cheeseman and Aiden Rushton did cause some problems but ultimately they couldn’t make anything happen for the side.

Their goalkeeper, Lucas Romero Jinks saw plenty of the ball and did well to keep Goring out as they looked to weather the storm.

But pressure finally told as Henley conceded twice in 10 minutes.

The first came from a ball that was played into the box which bobbled and was not cleared, leaving the Goring attack to find the net.

Five minutes later Henley conceded again when a ball was swung into the back post and a Goring player found the net to make it 2-0 at half time.

After the break, Henley changed their formation and went two up-front. This paid dividends after about 10 minutes when the hosts pulled a goal back.

Michael Millington won the ball in midfield and his cross-field pass found Nick Holzer who outpaced the Goring defence to put Henley back in to the game. Holzer then hit the post before Henley won a series of corners but they failed to convert any of them.

As the game reached its final stages Henley went all-out attack in search of an equaliser.

But Goring went further in front when a Henley defender failed to intercept a long throw-in, miss-timing his header, and it ended up in the goal.

Romero Jinks was called upon a few more times before a clash between Cheeseman and a Going player resulted in two red cards with just a few minutes remaining.

Cheeseman was hit with a hard tackle after going past a player which brought a straight red card. But in the heat of the moment a Henley player ran on the pitch to confront the offender and he was also sent off. Matt Ploszynski with two and substitute Mark Pearson scored the goals for Goring.

Goring were back in action again on Monday against
WARGRAVE. Another even game but Wargrave took the lead when Stuart Moss headed home from a free kick.

Goring made a few chances mainly from set pieces but couldn’t score and Wargrave should have extended their lead in the final few minutes but instead held on 1-0.

In Division 4, GORING UNITED RESERVES were thrashed 8-1 at the hands of
TWYFORD AND RUSCOMBE in their clash on Saturday.

Mikey Jones was his side’s top performer, bagging a second-half hat-trick and four goals in all.

Twyford open the scoring on four minutes through Ben Claridge before Alex Fletcher replied for Goring on 25 minutes before Jones grabbed his second on 34 minutes to put his side in the lead at the break.

The second half was all one-way traffic with another six goals being scored without reply.