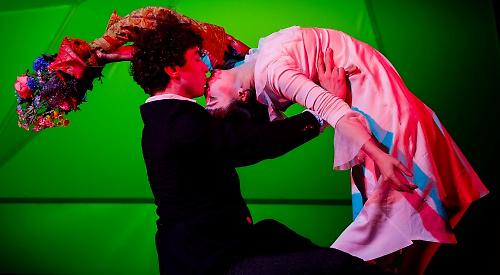 ENTRANCING, enchanting, joyful and sad — The Flying Lovers of Vitebsk is a lesson in how to be in love for a lifetime.

It’s a triumph for the production company, Kneehigh, and its director Emma Rice, who lets her imagination soar with the lovers in 90 minutes of stunning storytelling.

I’ll admit, this reviewer had a tear in one eye at the end ... and another in the other eye.

Marc Antolin as the Belarussian painter Marc Chagall, and Daisy Maywood as his wife, the writer Bella Chagall, take us through every emotion.

We see them come together, battle antisemitism, get caught up in the great and terrible events of the 20th century — the Russian Revolution and then the Nazi regime — and then finally settle in peace in the United States, avoiding Stalin’s and Hitler’s wrath.

Theirs is like most marriages — hard work, not always on the same page but still in the same chapter, sometimes angry, sometimes, annoyed, sometimes pleased and sometimes ecstatic.

They meet as teenage lovers and that is that, their fates are sealed until the death of one brings it to an end — except that it doesn’t. Playwright Daniel Jamieson has a coda reminding us that nothing is gone while its memory is still there. Jamieson and Rice bring every aspect of theatre to the table — there is fine acting interspersed with balletic movement and beautifully sung music.

The set is a managed tangle of thin tree trunks and an extreme raked stage with thick scrim at the rear to provide shadow entrances.

The story never flags — nor does the intensity of their relationship. So artful in the pacing of the piece as it moves through dialogue, dance and song that the time flies by and this reviewer is left with the thought that some people are lucky to just live their time in passion no matter what the world is doing.