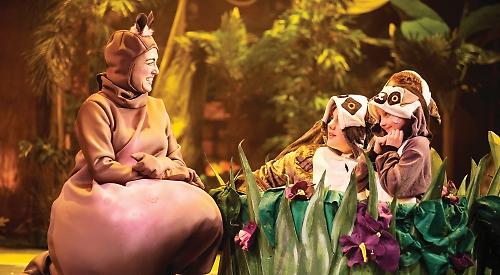 HAVING enjoyed the colourful extravaganza of Seussical the Musical at South Hill Park, I wondered just how much colour could be packed into Madagascar: A Musical Adventure. Quite a lot, as it turns out.

At the Central Park Zoo, Marty the zebra is suffering an existential crisis. He and his buddies, Alex the lion, Gloria the hippo and Melman the giraffe are all institutionalised to varying degrees — but Marty has had enough.

He notices some penguins making their exit — and adventure follows as a whole new world is opened up. But getting back to nature has its downsides, and the steaks are high...

With a marvellous waddle of penguins making their escape across the open seas, and the big four as stowaways, they fall at the feet of gloriously imperious King Julien (Michael Ayiotis on fine, hilarious form), a lemur with a penchant for showing haughty disdain, especially to sidekick Mort.

As all manner of strange creatures come to the fore, the mysteries of the island of Madagascar are revealed. And with everyone diving into their roles with gusto, this was powerful stuff.

Alongside energetic singing and dancing — featuring, of course, the fabulous I Like to Move It — there were fantastically authentic and caricature costumes, cleverly adjustable props such as multitasking palm fronds, and beautifully majestic backdrops.

The packed house at South Hill Park was in raptures and we all got up to clap, dance and generally join in as soon as allowable.

From the tiniest penguin to the kings of the colonies, everyone gave their all.

Madagascar: A Musical Adventure will be touring the UK from July to December.

For more information, and to book tickets, visit www.atgtickets.com/shows/
madagascar-the-musical