Strokes and how to prevent them 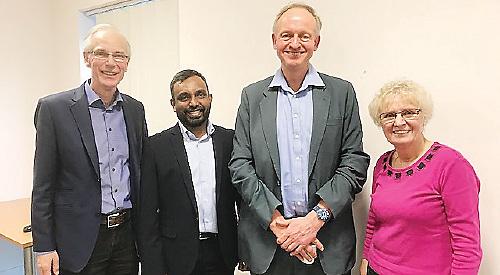 STROKES and prevention was the subject of the sixth in a series of consultant talks organised by the patient participation group at the Bell Surgery in Henley, which took place at Townlands Memorial Hospital on April 18.

The stroke team from the Royal Berkshire Hospital in Henley led the talk.

Consultant stroke physician Dr Kiruba Nagaratnam described the developments in stroke treatments from just aspirin to the latest advancements which involve fast diagnosis and then how some patients receive a thrombectomy (clot removal).

He showed the improvements in outcomes for patients over the past 40 years. There were lots of questions.

Dr Andre Van Wyke, elderly care consultant, discussed prevention and treatments and showed a video of a 99-year-old woman who was discharged after two days following treatment at the Royal Berks for a stroke.

Janet Waters, who chairs the patient group, thanked everyone for supporting the event and the surgery and Townlands staff.

The next talk will be “Gastroenterology” by Dr Jonathan Booth on June 19. Places can be booked through the Bell Surgery.