Soap star’s getting in a flap for musical role 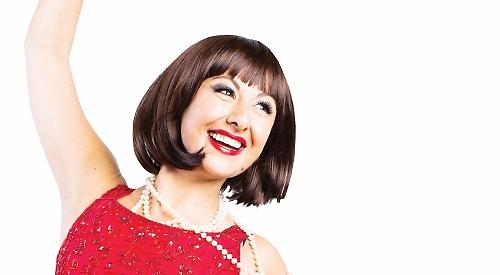 FOR the New Theatre Oxford read New York City next week — when audiences will be whisked back to Twenties America and the height of the Jazz Age.

It was a time when the “moderns” were entering the workforce — young women with their hair bobbed, hemlines raised and determined to rewrite the rules of love.

Their story was told in the 1967 Academy Award-winning film Thoroughly Modern Millie, which subsequently inspired the 2000 stage hit of the same name that won six Tony Awards including Best Musical.

The production coming to the New Theatre Oxford starts Hayley Tamaddon in the lead role of Millie Dilmount from Kansas, who escapes to the Big Apple, embraces the “flapper” lifestyle and vows never to return home.

Perhaps best known for her appearances in Coronation Street and Emmerdale, it turns out that acting in musicals was an ambition Hayley had from a very young age.

“I loved everything about performing. When I was little I wanted to be Bonnie Langford! I loved her! And then as an adult I got my chance to work with her!”

Hayley’s ambition was strengthened when she was a little older and her parents took her to the theatre. What were her favourite shows at that age?

“Oh gosh, I saw loads, but my biggest memories were Barnum and Cats! I was gobsmacked at Cats — I loved it. That’s when I really knew that I’d be in musicals after seeing that show!”

The 41-year-old actress’s stage career has so far seen her play a variety of roles — from Roxie Hart in Chicago and Diane Morales in A Chorus Line to the Lady of the Lake in Spamalot and Trish in Boogie Nights. But are there roles she still longs to play?

“Ooh yes! I’d love to do Victor/Victoria and Sweet Charity! I’ve been lucky with the roles I’ve been offered in the past, all dream parts! But I try to challenge myself so each role I do is a bit harder than the last! Millie being my biggest challenge yet.”

So was there ever a Plan B? Yes, apparently so — and it takes her nearer to that Emmerdale role than you may think.

“Horse riding was my second passion. And still is, really. But the day came when my parents said which would I choose to do long-term — and acting won.”

So how does appearing in a stage musical differ from those soap roles?

“Each come with their own different challenges. On stage, it’s real! There’s no saying ‘cut’ if you mess up or forget a line! You just have to carry on.

“And I do love seeing the audience at the end of a show. When I played Roxie in Chicago I used to well up most nights seeing the crowd on their feet.”

Has she played at the New Theatre before? “Yes! I opened with Chicago in Oxford! The audience were amazing and so supportive! And it’s such a lovely theatre!”

Thoroughly Modern Millie is playing at the New Theatre Oxford from Tuesday, May 1, to Saturday, May 5.

For more information and to book, visit www.atgtickets.com/venues/new-theatre-oxford