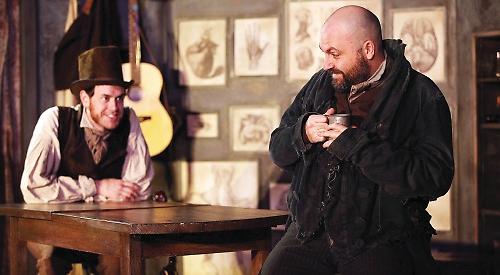 DIRE murder and trading in corpses may not sound like the stuff of comedy. But if you go and see the hilarious Burke and Hare at the Watermill Theatre, Bagnor, you may well change your mind.

Based on an infamous true story, the drama takes us to 19th century Edinburgh with its thriving medical culture. Inventive use of Toots Butcher’s simple set allows the stage to serve as surgery, lecture theatre, boarding house and more.

Katy Daghorn as Dr Monro assumes command from the outset, positioning the audience as students attending her anatomy lecture. In this guise she introduces the other two cast members who curry favour with the audience as the two Williams — Burke and Hare (Hayden Wood and Alex Parry).

A complex narrative unfolds, centring on the need for medics to have bodies to dissect and the desire of impoverished, unscrupulous people to make some quick cash.

A rapid growth in medical science meant that corpses were in short supply. The doctor who could secure the bodies for dissection also secured the students, so there was much at stake, as revealed by the rivalry between doctors Monro (Daghorn) and Knox (Wood).

The play dispels the myth that Burke and Hare were grave robbers: they were cold-blooded murderers, preying on the vulnerable and egged on by the money-grabbing Mrs Hare.

A moral debate is lightly touched upon as the murderers persuade themselves that what they are doing is mercy-killing.

Burke and Hare’s descent into crime runs alongside a sub-plot of the growing romance between Burke and a boarding house serving girl, Helen. The path of their love is not set to run smooth! Things come to a head when Burke carelessly lets secrets slip and the case goes to court.

Such a small cast — just three players — means multi-tasking in several roles each. They achieve this to great comic effect, using voice, gesture and the occasional prop to transform at lightning speed from one character to another, including the string of unfortunates who frequent the Hares’ boarding house and who will soon become victims.

The priggish medical student Ferguson is cleverly played by all three cast members in turn, continuity being provided by the character’s trademark red jacket and a set of distinctive mannerisms. At one amusing point, the cast realises there are not enough of them to portray all the characters supposed to be on stage at a particular moment. At another point, Alex Parry is required single-handedly to portray the many members of Helen’s family in quick succession. In Abigail Pickard Price’s production, the bare bones of theatre are not just exposed but made a comic feature of.

Burke and Hare is a beautifully constructed piece that allows for some poetic justice at the end. The cast offers a virtuoso display of comic acting, singing and music — and some impressive stage drunkenness.

All credit to them for their versatility in this vigorous, fast-paced production. This may be comedy from a strange source — but it works. The audience loved it and you will love it too.

Catch it at the Watermill until Saturday — or when the production goes on tour to village halls in the local area. For tour dates, times and to book tickets, visit www.watermill.org.uk/
on_tour_burke_and_hare