Dog owners blamed after attacks on flock of sheep 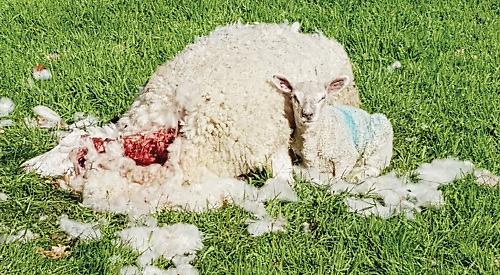 A PAIR of landowners have blamed dog owners for three attacks on a sheep flock which left a ewe and a lamb dead and another lamb critically injured.

Harry and Gabbi Conway say dogs should be kept on the lead when they are near livestock and warn that they are more likely to attack again after doing it once.

The couple, who run Conway Farm at Shepherds Green, were left horrified after this week’s attacks in a field with sheep and young lambs.

The first incident happened at about 8.45am on Sunday.

The couple saw a black cocker spaniel off the lead chasing a group of four-week-old lambs before attacking one. It bit the lamb in the neck, fatally wounding it.

The couple spoke to the dog’s owner, who gave her name and a Henley telephone number, but this turned out to be out of date. However, the woman has since been traced.

In the second incident, on Monday, a lamb was badly injured in a suspected dog attack. Mr Conway said: “The lamb is still alive but we don’t hold out much hope.”

In the third incident a ewe was killed. The Conways found her bloodied body in the field on Tuesday morning with her lamb still at her side.

The couple have reported the incidents to the police. Mr Conway said: “The pictures of them are quite upsetting but we wish to make people aware that when they see livestock in a field they should take great care with their dogs.

“Unfortunately, dog attacks are now all too common and it is vital that dog owners have complete control of their dogs living near and walking through areas where sheep are being kept. Once a dog has attacked it is highly likely it will do this again.”

A public right of way runs through the field and is used by hundreds of people every week.There are signs displayed at every access point asking owners to keep dogs on the lead.

Mr Conway said: “After having so many owners taking no notice of signs we felt it was time to publicise this matter to raise awareness.”

Isobel Bowden, who owns Bowden & Sons based at Mill End Farm, highlighted the impact of dog attacks on her flocks in a video made by the NFU.

She said: “This time of year we hope to have around 3,000 lambs across the farms going into the spring and summer. When the weather is good we can have one dog attack a week in some fields, which is absolutely heartbreaking as a farmer when you have put so much effort and time into your livestock.

“I genuinely love these animals, as do many farmers. It’s not just my living, it’s my whole life. It can take weeks and weeks to nurse an animal back to full health, let alone when it has to be put down. That’s even more devastating.

“As a general rule always keep your dog on a lead in the countryside. You never know what livestock might be just around the corner and every dog, big or small, has an instinct to chase livestock.”

It is an offence to let a dog chase or attack farm animals. If a dog worries livestock, the dog owner or the person responsible for the animal at the time is guilty of an offence under the Dogs (Protection of Livestock) Act 1953 and may be sued for compensation by the farmer.

Anyone with information should call Thames Valley Police on 101, quoting reference number 461290418.