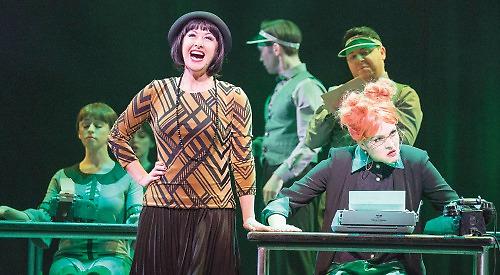 A STORYLINE thinner than a human hair, a sickly moral message about love over gold, a sometimes quite bland set of songs despite their quantity — what exactly does Thoroughly Modern Millie have going for it?

The answer: stunning all round performances from everyone on stage which transcend the above and make this nearly three hours zip by.

This is the sort of show where you check your travails and woes at the door and let the feelgood factor seep into you.

Topping the talent list as both star and performer is the Coronation Street actress Hayley Tamaddon. She dances and especially acts and sings with an intensity to leave us breathless.

She’s not especially sexy, nor beautiful, but the 41-year old has an immense appeal which makes what could easily be a cold-hearted musical warm up.

Naive Millie Dillmount arrives in Twenties New York from Kansas, tears up her return train ticket and vows to find a rich husband. We are led through her various adventures until her dream comes true.

This is part romance and part pantomine — there’s even a fake Chinese person in drag with a couple of genuine Chinese people acting as his Cheech and Chong.

And just to set the seal on that, Millie marries at the end and performs a pantomime walkdown in a glittery gown.

There are 19 songs in this show, all performed impeccably and with passion. Most of the time the performances and harmony arrangements cover up their ordinariness, but not always. There is new music but it’s been written in Twenties jazz style, borrowing heavily from the New Orleans tradition of structure — something that works for jazz, especially with someone like Louis Armstrong to take it out of the ordinary.

But there are only so many things you can do with those chords: the great melodists of the last century came a decade later with Cole Porter and George Gershwin leading the charge.

But still they danced and sang their way through with so much vigour and commitment that it didn’t seem to matter.

Also, watch out for great vocal performances from Michael Colbourne as Jimmy Smith and Richard Meek as Trevor Graydon — the latter also does a hilarious drunk turn and on this night yanked the scenery out of place to riotous effect.

The other star of the show is the set — it’s not quite the Chrysler Building, not quite Grand Central Station and not quite the Statue of Liberty but it yells art deco New York and goes a long way to making it all work.