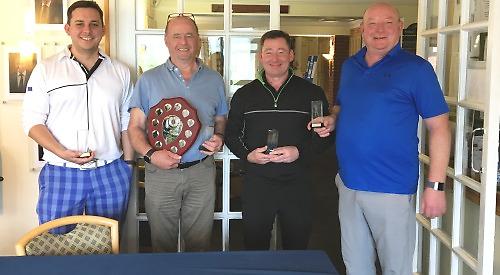 A TEAM from the Saracen’s Head pub in Henley won the 2018 Brakspear golf day.

Almost £400 was raised for Marie Curie, Brakspear’s charity partner, with a closest to the pin competition on the seventh hole.

The winners received a firkin of Brakspear Bitter for the pub and another one for Paul Hughes’s hole-in-one with his first stroke of the day.

Each team member received a mini-trophy, bottle of champagne and a voucher for two to play at Henley Golf Club.

The winners and second-placed team from the Reformation in Gallowstree Common also won some Brakspear beer.

Colin Roberson, licensee of the Saracen’s Head, said: “We had a tremendous day. Obviously winning made it extra special but it wasn’t all about the competition, but more a chance for us to treat a few of our regulars and enjoy the day with other Brakspear landlords and customers.

“It was also great to see a good sum of money raised for Marie Curie, a worthy charity that we’re all supporting at the Saracen’s Head. We’ve raised more than £1,000 through various activities in the pub.”

Tom Davies, Brakspear chief executive, said: “This affection from regulars for their local is what makes our pubs so special and the golf day is a great way to reward those customers and our landlords.”

The Angel on the Bridge in Henley finished fourth, one place above the Brakspear head office team.