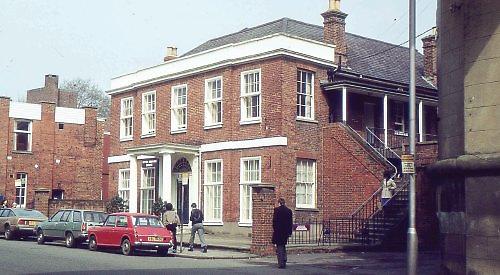 THE subject of the April talk was the Simonds family of Reading.

The speaker was Raymond Simonds whose father, Duncan, was the last family member to be a director at Simonds Brewery.

Raymond was born in Pangbourne and completed his formal education at Bradfield College before forging a career in the hospitality business.

The Simonds family’s connections to Reading and Berkshire can be traced back many centuries through the extensive family tree — its members came from around Britain and Europe.

Later, his reputation was ruined when he was found guilty of perjury for the evidence he gave at the trial of four men accused of heresy. They were all found guilty and sentenced to death before being posthumously pardoned by Henry VIII.

An eminent figure in the family’s history was William Blackall Simonds (1762-1843) who soon after he married at the age of 22 inherited his father’s small brewing business in Broad Street, Reading.

He was ambitious and expanded the business.

During the 1790s he established the sprawling brewery in Bridge Street. The site was shrewdly chosen as it had access to the many wharves along the River Kennet. It also included The Bear coaching inn, which faced Bridge Street, a thoroughfare used by stagecoaches.

William commissioned the celebrated architect Sir John Soane to design a house for the family on the site.

A major coup was to obtain the contract to supply beer to the Military Academy at Sandhurst.

William, never one to keep all his eggs in one basket, later ventured into banking and established the J & C Simonds Bank in partnership with his cousins John and Charles in King Street, Reading. The business merged with Barclays Bank in 1913.

George Blackall Simonds was born in 1843 and before absorbing himself in the brewing business and eventually becoming the chairman, he had a successful career as a sculptor.

Around Reading he left a rich legacy — the Maiwand War Memorial (the lion on the plinth) at Forbury Gardens, the Queen Victoria statue in Friar Street and the George Palmer statue now at Palmer Park, to name but a few.

At the time of the brewery’s merger with Courage Brewery in the Seventies the business was valued at £9.8million and owned 1,200 pubs.

Later the brewery was rebuilt at Worton Grange, south of Reading, before closing in 2010.

Today, the site at Bridge Street is mostly occupied by the Oracle shopping centre. The former brewery is commemorated with an information board at Kennet Side erected by the Reading Civic Society in 2009.

The subject of the next talk will be the “History of Greyfriars Church” by Malcolm Summers. This will take place at Abbey Baptist Church, Abbey Square, Reading, on Wednesday. May 16 at 7.30pm. All are welcome — entry costs £2 for non-members.