When it comes to our best bits, the eyes have it 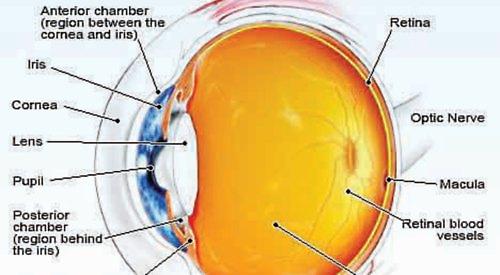 WHAT do actors Christopher Walken, Dan Aykroyd, Simon Pegg and Jane Seymour all have in common?

It takes only a quick glance at the headline on this article to ascertain that it must be something to do with their eyes.

Well done though if you said that they all have heterochromia, which means that each of their eyes is a different colour.

Regardless of whether you have this rather exotic trait, these clever and intricately complex little organs tend to be a focal point and, at an individual level, one of our most vivid and emotive defining features.

The eyes are thought to have evolved initially in single-celled organisms that held light-sensitive proteins.

Over many millions of years, the process of “seeing” became a reality through a mind-boggling transition into the eyes that we know today.

Across the animal kingdom, there are many different types of eye and, as is the outcome of all evolution, the creatures they serve benefit in different ways depending on the environments in which they live.

Geckos can see colour 350 times better than us, bees have five eyes, most spiders have eight and worms merely have a collection of light-sensitive receptor cells.

Not all eyes are structurally the same. For example, some vertebrates, including cats, have an extra layer of tissue behind the retina (the layer of cells that collects and processes light) called the tapetum lucidum.

This reflects any light that has got through first time round and reflects it back into the retina again, giving rise to excellent night vision — very handy for catching unsuspecting mice.

It also results in the eye-shine we see when some type of mammal is lurking in the bushes and served as inspiration for the “cat’s eyes” we see on our roads.

We humans must make do without these handy features and are limited to just the two eyes. This is better than one though, as it gives us a perception of depth.

To enable us to see, we must collect the light from around us and process it. Light bounces off everything (almost) and if we look towards something the light from it will hit our eyes. This light travels first through the cornea and then through the pupils (the holes made by the retractable fibres that make up the iris). The iris is the part that gives our eyes their colour.

Here it hits the lens, a rounded clear organ that alters in size as we focus differently.

This allows it to redirect light from different distances on to the back of the eye where the retina sits, so that it doesn’t produce a blurry picture.

At the retina, the light is converted by different types of cells into nerve signals and the information is then taken via the optic nerve to the brain where it is further compiled into what we understand as “sight”. Interestingly, because of the way in which the light is focused on the retina, the unprocessed image is upside down and back to front, so the brain must flip these back the right way round.

As doctors, the eyes are a useful thing to check when examining a patient because they can tell us a lot about a person’s health.

Shining lights into the eyes causes the pupils to constrict and faults here can point to certain neurological conditions as can double vision and loss of visual fields.

Looking at the back of the eye, we can sometimes tell if there is raised pressure in the fluid surrounding the brain while at the front there are characteristic appearances in or around the eyes of people who might have thyroid problems or high cholesterol.

In babies, it is important to check for something called the red reflex, the normal red-orange colour of the eye when light is shone.

Asymmetry here or a white reflection can sometimes point to something called retinoblastoma, which is a type of cancer.

The most common eye examination one might receive is the visual acuity check. Using the Snellen charts, reading the letters on rows of ever- decreasing size, we challenge ourselves to get to the very bottom level.

The phrase “20/20 vision” is often talked about. This essentially means we can see something at 20 metres that the average person would see at 20 metres.

Outside America, we use six metres as a scale and if you wanted really exceptional vision, you would aim for something more along the lines of 6/7 (in other words you could see something from 7m that the average person would only be able to read at 6m).

If our vision isn’t quite up to scratch, we might need a correction and this is where glasses and contact lenses come in.

Depending on which survey you read, between 69 and 77 per cent of people in the UK wear glasses or contact lenses — so many that it isn’t surprising that they have become something of a fashion accessory!

More seriously, there are currently about two million people in the UK living with a level of sight loss that has a significant impact on their daily life. There are around 350,000 people registered as blind or partially sighted.

There are a plethora of conditions that can cause such sight loss:

• In the UK, age-related macular degeneration is a major cause. This is a deterioration of the macula, a part of the retina, due either to the formation of deposits on the retina or to fluid build-up underneath the macula.

• Diabetes is a big cause of sight impairment as it causes progressive damage to the blood vessels at the back of the eye and is known as diabetic retinopathy.

• Glaucoma is a build-up of pressure in the fluid within the eye. Your optician will check your pressures by puffing air at the eye using a machine. As long as it is well controlled and monitored, it can be treated with certain medicated drops.

• Cataracts are a gradual clouding of the lens. When vision is too severely affected, surgery is an option to correct this.

• Retinal detachment is an emergency and characteristically involves a sudden curtain of vision loss falling over one eye. It may be preceded by flashing lights and a sudden increase of floaters and needs an immediate trip to eye casualty.

Incidentally, floaters are small bits of debris that float in the eye and move around with a slight lag as the direction of gaze changes –— these are common, and, except as mentioned above, are not normally something to worry about, although they can be very annoying. Unfortunately they are essentially untreatable.

As GPs, we often see a handful of more common and less serious conditions that could have been dealt with first by a pharmacist or managed at home.

Red and gunky eyes most often represent conjunctivitis, while red swollen eyelids (blepharitis) or a cyst or stye over the lid can be treated with hot compresses and a watering eye can be your body compensating for a dry eye, so try some lubricating drops. Most eye conditions do not need antibiotic treatment.

If your eye is painful, however, or if you are not quite sure, this must be reviewed, especially if it is red as well.

There is a local eye casualty at the Royal Berkshire Hospital that patients can call if they are unable to get to their GP. This may be where your GP refers you if they feel it needs more in-depth specialist review.

The following recommendations can help to keep your eyes healthy:

• Don’t smoke. Unsurprisingly, this causes all sorts of problems, including macular degeneration and cataracts.

• Make sure you wear sunglasses as it protects against harmful UV rays and makes you look awesome.

• Get regular optician checks. Apparently about 10 per cent of the adult UK population has never had an eye check. Problems are not always immediately evident so it’s best to get checked every two years at the very least and more frequently if you’re over 40.

• Eat the right things, gnerally anything with lots of omega 3 fatty acids and vitamin A (also known as retinol which helps with night vision). Examples are oily fish, kale, spinach, peppers, oranges, broccoli and eggs.

So overall, eyes are marvellous things and, more than that, they are deeply personal. One only has to look at the rising use of retinal scanning to realise just how individual they are — fingerprints have about 40 individual features but the average iris has 256.

We have only two eyes, so we must take the best possible care of them.