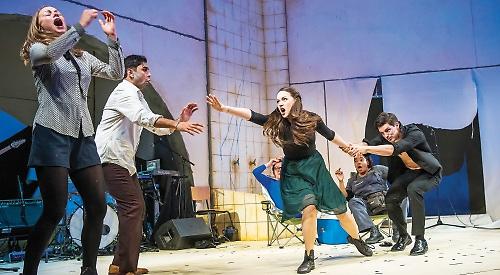 PLAIN bonkers. An amazing night out. A performance to treasure. A glorious mess of an already crazy idea.

As if Shakespeare hadn’t written an already mad play — maybe after going too hard at the mushrooms — along comes Filter Theatre and the Lyric Hammersmith to show us that it can be madder still.

A Midsummer Night’s Dream already has squabbling fairies, magic flower juice and people falling in love all over the forest. Here we add in stand-up, rock music, slapstick and the delicious idea that Bottom might actually have got it on with Titania.

Much of the text is surrendered in favour of the latter additions but we can’t help feeling the Bard would have approved.

When he wasn’t writing angst-ridden tragedies he liked a good belly laugh and there are plenty of those here.

We start with a 15-minute stand-up routine from Peter Quince before a bit of the original play introducing the lovers, then back to Quince and his Mechanicals as they fool around.

That’s how the next unbroken two hours goes — some text, some fooling around, some more text. There are many outstanding aspects of this performance but Quince’s timing is exquisite and Oberon’s superhero tights-clad King of the Fairies is unfailingly funny.

All of this is played out against a grimy subterranean background that is so far from the Forest of Arden there can be no connection. It’s a mixture of disused tube station and the legendary Cavern Club. Director Sean Holmes has taken a lot of liberties with the text — that’s putting it mildly — but maybe not so much with Shakespeare’s intent.

The Shakespeare purists will struggle with it, but the rest of us just raise our hands and say thank you — we are living in a bonkers world at the moment and this slotted right in.