‘History — the juicy bits’ was a feast of wits and giggles 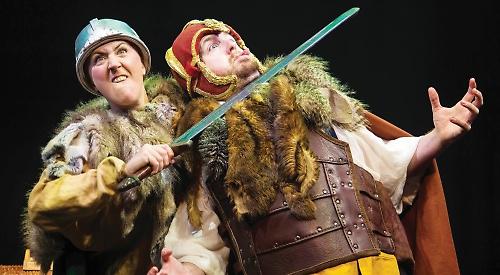 A REAL livewire of a show, the Birmingham Stage Company’s double act of great characters Benedict Martin and Pip Chamberlin injected humour, pizzazz and vivid imagery into this comical precis of the craziness of life on this sceptred isle.

Imagine taking a fusty old history book off the shelf, blowing the dust off its cover and shaking it until all the juicy bits fall out — that’s this show in a nutshell. It was ideal material for my two sons, packed as it was with gore and fart gags.

On top of this, I genuinely found it filled a few gaps in my education, with its clever means of transmitting historical facts directly into our brains, through songs and skits.

Covering everything from the etymology of place names after invasions (thank you, Romans, Vikings and Saxons) and various royal antics and societal rules and norms (I’m looking at you, Tudors and Puritans), right up to more recent disasters, a lot of ground was covered.

With dressing-up boxes, snazzy costumes and pertinent melodies, it was a whirlwind tour of our island story.

The myths surrounding Dick Turpin were brought to us in the style of The Only Way Is Essex, while General Haig’s ill-fated forays into battle were seen through the eyes of Sir Alan Sugar, resonating with the audience and giving things a contemporary spin.