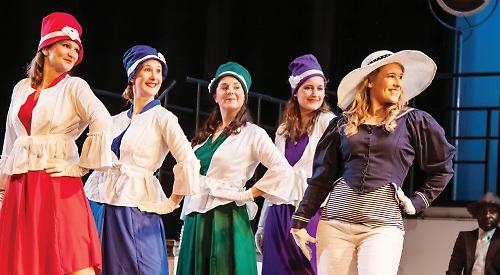 Anything Goes | Hexagon, Reading | Thursday, May 17

ANYTHING GOES is a musical showcase for some of Cole Porter’s wonderful songs.

Dating from 1934 starring Ethel Merman, it has gone through several revivals, including the 1962 version which was performed at the Hexagon last week by the Sainsbury Singers.

This version is noted for the introduction of Porter songs from other shows. It also features a rather simpler staging.

But it’s the music that is the star in this show. Well known numbers such as You’re the Top, It’s De-Lovely, Friendship and of course Anything Goes itself. Some powerful voices are required together with a strong chorus to make an effective impact.

The Hexagon has a large stage, of course, and this was filled with a stunning portion of the deck of the SS American, bound for London with a number of dignitaries on board together with a notable gangster.

There are businessmen, couples heading for a marriage, girls looking for love, everything required for a grand mix-up of a story but plenty of opportunities for singing about it.

The dialogue is rather dull but the songs are great. Many of these are chorus numbers and that gives ample opportunity for the Sainsbury chorus to fire up.

And that also means some dance numbers. They do have some talented dancers and they were used to great effect. But the numbers did include the whole company and that makes a colourful display.

I’m afraid that there were some issues with the Hexagon’s sound system, although that did settle down. It’s such a poor acoustic there, so everyone needs to have microphones. And that needs careful balancing for best effect. Generally the sound was good and not overpowering. The small orchestra did well.

The show opens with passengers coming on board which is better than listening to the overture with closed tabs, but why was that done with the house lights turned on?

Most of the action took place on deck but there were some small scenes in front of the tabs which were rather poorly executed. Maybe an alternative would be to use the deck scene with some selective lighting.

Steven Cox as Billy Crocker and Lorraine Cox as Reno Sweeney acted and sang well, Lorraine giving a passing impression of Ethel Merman but with softer tones. Steve Jewell as Moonface Martin and Louise Quelch as Bonnie brought an energy to their parts and upped the pace whenever they were on. The pace did slow down in some places, especially in the front-of-tabs scenes.

But I enjoyed the big numbers. The principals need to take some care with choreography as too much activity spoils the singing. You’re the Top was a good opener, Friendship was a great trio number and I particularly liked Blow, Gabriel, Blow which was a really energetic song. And of course Anything Goes finished the first half well.

The Sainsbury Singers’ performances tend to be rather traditional and stylised and their core followers like that. When they do break out into more modern shows, their talents really shine. But for an old staple as this, it can look rather dated. There’s nothing wrong with that and the rather small audience really enjoyed it.

Until Saturday. For tickets and times, visit www.readingarts.com