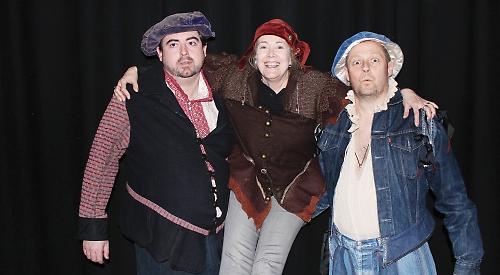 Rosencrantz and Guildenstern are Dead | Corn Exchange, Wallingford | Wednesday, May 23

TOM Stoppard’s Rosencrantz and Guildenstern are Dead is a masterpiece of intertextuality in the way it lifts two minor characters from Shakespeare’s Hamlet and deploys them in an exploration of the meaning of life.

Will Lidbetter and Tom Richards as the title characters are, of course, the mainstays of Lucy Pitman-Wallace’s production for the Sinodun Players.

They display quiet confidence in their roles, both when philosophising on life’s deep questions and also when clowning as a double act.

On Act I’s bare stage, the pair pursue a coin-tossing game to evoke how chance and coincidence feature in our lives.

Their banter provides the launchpad for questions about such fundamental issues as mortality and happiness.

They make comic capital from the language of philosophical debate and Stoppard’s linguistically rich script is safe in their word-perfect delivery.

Stoppard’s concept that we humans are all playing a part is carried forward by the band of tragedians, responsible for performing the play within a play in Hamlet.

Admirably led by John Jones as The Player, the troupe brings colour, music, song, comedy and a touch of melodrama to the proceedings.

The central query of Rosencrantz and Guildenstern are Dead is whether theatre can be regarded as a metaphor for life.

This is a drama about drama, with space for the audience to think about the difference between acting and action, as Rosencrantz and Guildenstern fumble their way through the bewildering events unfolding around them in Elsinore.

More unexpected still is the trick Hamlet plays on his former friends, resulting in their execution instead of his own and underlining the essential randomness of both life and death.

The notion of identity is made fun of when other characters confuse Rosencrantz with Guildenstern and vice versa. The question of “Who am I?” is reinforced by the spies, seen as doubles for Rosencrantz and Guildenstern through clever use of costume by Sue Forward.

The subtle direction of this production allows the cast successfully to bring out the wry comedy of the play.

Members of the audience leave the Corn Exchange with the idea that life is absurd, indeed a gamble at terrible odds — but they also leave with a smile.