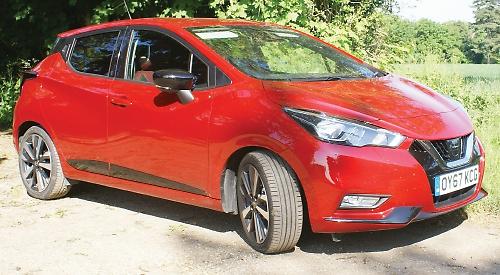 This may appear a small consideration to those motorists who have come to terms with rampant digital connectivity, but as yet I have not completely rolled over.

So although I am quite capable of pairing a smartphone with whatever connectivity is available, most cars I drive today do not have CD players.

The fact is, drivers of a certain vintage such as myself do have CD collections and like to play them in cars.

And yet the car I have been driving this week, the all-new Nissan Micra, is such a complete little car in many ways that, yes, it did have a CD player.

Now this is curiously obliging of Nissan (and I congratulate them for it) because although the new Micra has to be predominantly aimed at young drivers — where else? — Nissan did not forget the mature folks who like to play CDs.

Actually, the all-new Micra is a hit with those new to motoring.

This was confirmed recently when the Micra won the FirstCar car of the year award as the best new car for young drivers. FirstCar describes itself as a “one-stop-shop for learner and newly qualified drivers” and the inaugural FirstCar Awards were given for the best driving schools, products and cars for new drivers.

This is my second outing in the all-new Nissan Micra and I have been as impressed as I was at its launch (the latest fifth generation Micra was unveiled at the 2016 Paris Motor Show).

My unequivocal verdict on the new Micra in June of last year was that it was excellent all round and this “completely new small car is a highly successful exercise in reinvention”.

Exactly one year on, after having covered some 400 miles in the new Nissan Micra dCi 90 Tekna Manual in Passion Red last week, I have no reason at all to change my mind on that verdict as this car remains a game-changing city slicker. The engine of the model I have been driving was the one diesel engine available in the Micra — a 1.5-litre dCi 90.

There are also two petrol engines available. The excellent little turbo petrol engine called a 0.9I IG-T 90 powered the car I drove a year ago.

I think on balance I prefer the petrol-engined Micra because it does have more get-up-and-go and a willingness to perform (which says it all as the diesel engine is actually bigger in cubic capacity).

But the power unit aside, this 1.5 dCi 90 Micra was still the new Micra that has proved a revelation to those familiar with previous generations of the model. Not that there was anything wrong with them. In fact, the Micra has a distinguished history as a city car from day one.

But someone at Nissan in the design team responsible for this new look had the genius to reinvent the Micra entirely in its fifth generation. That kind of achievement in design gets my vote every time.

Returning to the sound system for a moment, anyone who loves music as I do knows that it does not matter what kind of connectivity you have — what is important is the quality of sound.

And forgive me if I reach for another superlative with regards to the Micra but the sound system is superb. But it is not just me that thinks that. As the awards for the new Micra keep on coming Nissan picked up another prestigious one for the Micra’s “pioneering audio performance”. (I think we have to thank Bose for the CD player.)

The Bose Personal system — with innovative speakers built into the driver’s headrest — has been honoured by the readers of Auto Bild.

Readers of both titles voted number one the Bose Personal in the Nissan Micra in the “entertainment sound” category.

So there you have it. A car of long antecedents going back decades (it was introduced by the Japanese car maker in 1982) can still cut it in 2018 — some 36 years on.

It is also worth noting that the standard equipment was extensive (a few items of which are in our factfile, below) on the new Micra Tekna I have been driving.