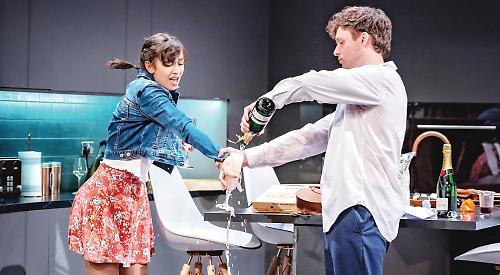 The Be All and End All | Theatre Royal, Windsor | Wednesday, May 30

WE all want the best for our children, and some have the wherewithal to secure them an expensive education — thereby enhancing their opportunities in a cut-throat, competitive world.

But where do we draw the line between a helping hand and encouraging self-reliance — and taken to an extreme, trust versus dishonesty? How far can money go?

This dark comedy looks at a household under duress, as Tom (Matt Whitchurch) and his parents Charlotte (Imogen Stubbs) and Mark (Jonathan Guy Lewis) try to get through A-levels, Brexit, cancer and all the traumas they entail, while Tom’s exceptionally bright girlfriend Frida (Robyn Cara) looks on.

Beginning with some light-hearted banter from cultured Charlotte and politician Mark, soon the cracks begin to show as we hear how much money has been poured into frazzled and anxious Tom’s schooling, while the more grounded Frida seems to sail straight through her exams with ease.

Mark seems keen to ensure a smooth path for Tom, while Charlotte takes the traditional route of pleading with her son to put in the revision hours to gain the necessary A* grades.

As the layers are peeled back and more of the family’s complicated history is unearthed, each character descends into their own corner, fighting their own internal battles — and all the while Tom’s exams loom ever closer.

This was a satirical look at the things that money can buy, the power of politicians — Mark’s comment that he can’t change the world is met with a fantastic retort from Tom: “You work in the government!” — and the futility of following a course when your heart is not in it.

As the drama ramped up, Imogen Stubbs portrayed a suffering, devoted mother beautifully, on the surface a snappily dressed high-powered professional, burying a lot of pain.

Jonathan Guy Lewis went from hilarious impressions of former Henley mayor Boris Johnson to being somewhat less of a parody, while Tom and Frida tried to get through the exams treadmill with various coping mechanisms.

As a message in following your dreams, your passions and your heart, as opposed to placating and appeasing those around you, this was a tour de force.