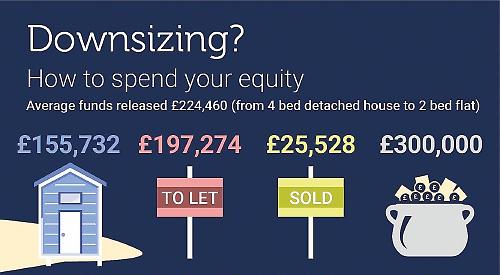 MORE than half of owner-occupiers across England own their homes outright, with a significant portion of these homeowners being pensioners who, thanks to house price growth, have amassed significant equity in their homes.

Despite the large amounts of equity that could be released, many homeowners are reluctant to downsize.

Some have an emotional attachment to their family home while others view it as downgrading and perhaps a sign that they are struggling, while some are put off by the hassle and upheaval of moving.

A recent study has predicted that if owners moved from their existing four-bedroom detached home to a two-bedroom flat, they could release on average just under a quarter of a million pounds. The amount varies by region — from £155,000 in Wales to £466,750 in the South East and £815,000 in London.

A spokesman for Romans estate agents, which commissioned the study, said: “Our experience shows that those who are reluctant to downsize often change their minds when they realise just how much equity is tied up in their home or how much flexibility and freedom it can provide.”

Romans director Antony Gibson said: “Many last-time buyers are surprised by just how much their property has increased in value. With many properties around the South East historically making more in terms of capital growth than the average wage, we are seeing a flock of movement from the over-50s.”

For those who have lived in a home for a significant period of time, it is likely that you will have a considerable amount of equity when you sell.

Older people who no longer work yet live in a commuter town could sell up and move somewhere a little more rural or on the coast and get more for their money.

The equity released could be used to fulfil one of your life’s ambitions, whether it’s going on the holiday of a lifetime or offering financial support to your loved ones.

The Romans spokesman added: “It’s a common misconception that bigger is better when it comes to property. But particularly for those who have been in their property for a long time, moving into a new home provides an excellent opportunity to upgrade.

“Just because your new home is smaller doesn’t mean it has to also decline in luxury. Why not upgrade to a chic modern apartment fitted with the latest technologies to make your life simpler? Or go back to basics and move into a charming cottage. Just don’t think that because you are downsizing you must also downgrade in quality.”

Many last-time buyers have the majority of their money tied up in their property. The extra equity released from downsizing could supplement their retirement income.

By downsizing, many are able to reinvest this money into stocks, shares or even a buy-to-let property, meaning they have a nest egg which they can draw upon during retirement.

The spokesman added: “Less space also means less housework and more spare time. With fewer rooms, a slightly smaller garden and one garage rather than two, it’s surprising how much time and money you’ll save.

“Your heating bills will be less, as will your insurance. With fewer rooms and less outdoor space, cleaning and gardening chores will also be reduced.

“If moving into a managed housing complex, you also have the added benefit of the managing agent taking responsibility for larger and more costly repairs.

“If this has piqued your interest in downsizing, contact us for a free, no-obligation property valuation online or call us on 01344 985666.”