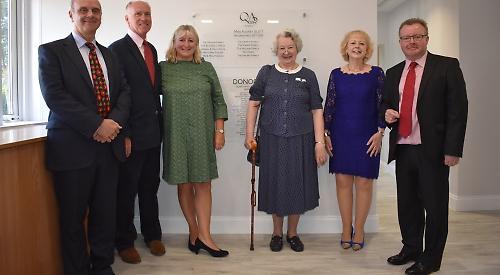 A NEW £1.45million music centre has opened at Queen Anne’s School in Caversham.

The Scott Music Centre is named after Audrey Scott, who was headmistress of the independent girls’ school from 1978 until 1993 and was invited to perform the opening ceremony in front of about 250 guests.

The centre, formerly a dining hall and kitchen, was designed by Windsor architects Edgington Spink & Hyne.

It has sound-proofed practice rooms, a Mac suite, music offices and an ensemble space for smaller performances as well as 21 new pianos.

There is also a new music hall attached to the centre called the Taylor Hall in memory of Queen Anne’s alumna Jean Mary Taylor, who was a pupil at the school from 1946 to 1950 and died in 2016.

The development was paid for by a combination of donations and the school’s own funds.

Headmistress Julia Harrington said the centre would be a source of creativity, enjoyment and relaxation.

She said: “We want to develop first-class music experiences for our students.

“Our music department has been strong for years but they have been closeted away in ancient practice rooms, so it’s great to have this new facility.

“It was lovely to see the donors here and so many alumni who came back to celebrate with the teachers they feel gave them so much.”

Miss Scott designed a new music centre when she ran the Henley Road school but when she retired her successor decided this would be a performing arts centre, which opened in 1994.

“I wanted to call this the Scott Music Centre because I knew she would be thrilled,” said Mrs Harrington.

“Her continuous support for music at the school since her retirement has been an inspiration to us and we were honoured when she agreed to the naming of the new music centre.

“She has been such a source of wisdom for me. It’s lovely that we can celebrate the school together and look back over the years.”

Director of music John Padley said: “This is a crucial time for the arts in education, in particular music.

“We are investing in our girls’ future by not narrowing their horizons as the English Baccalaureate does but broadening them by offering them the skills of performing, confidence, pursuit of excellence and also what music can offer to their wellbeing. These are essential skills for life.”

Sue Laing, the outgoing chairwoman of the school’s development board, emphasised the role that donations had played in enabling the new centre and thanked everyone for their support, notably the board, governors and trustees.

After the ceremony, guests could tour the building and music students performed.

She spoke about the importance that music plays in people’s emotional wellbeing.

The centre will be available for use by the wider community.

Mr Padley explained: “Children will be able to take music lessons from beginner through to grade 5 on selected instruments on Wednesday and Thursday evenings from September.

“Our partnership with St Anne’s Primary School in Caversham continues to grow.

“A few weeks ago we were able to donate a wide range of percussion instruments for classroom music-making. We will also be giving them a set of music stands to replace their very old stock.”

A second phase in the project will take place next summer with the creation of a new recital hall and recording facilities.