MPs and health chiefs given tour of ‘flagship’ hospital 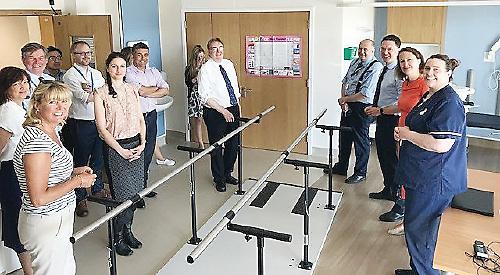 HENLEY MP John Howell hosted a visit to Townlands Memorial Hospital in Henley by his fellow Oxfordshire MPs, health chiefs from Oxfordshire and Berkshire and the chief executive of Oxfordshire County Council.

The £10 million hospital opened in April 2016 followed by the rapid access care unit in January 2017. The hospital offers services such as antibiotic treatment and transfusions, a minor injuries unit, podiatry, outpatient services, physiotherapy and out-of-hours GP services as well as up to eight beds at the neighbouring Orders of St John care home, Chilterns Court.

Mr Howell said the hospital was a national flagship of the new approach to healthcare, recognising the need to treat people as close to home as possible, and the visitors were able to see how well this was working and hear clinicians explain the importance of integrating health and social services.

He said: “I have spoken extensively in the House of Commons about healthcare and the model presented by Townlands Memorial Hospital. The hospital is a great success and I am glad that patients who have used the hospital speak so highly of it.

“My colleagues as local MPs have been keen to see this for themselves with a view to seeing how something similar might work in their own constituencies. The visit was arranged to fit with the regular programme of meetings between MPs and the health service in Oxfordshire, which I chair.”