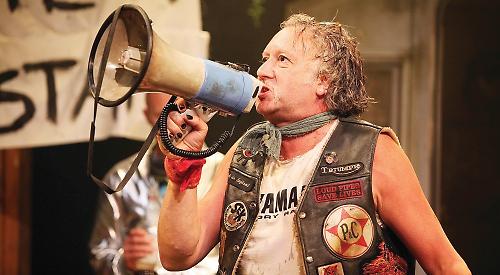 FOR Jerusalem at the Watermill in Bagnor, the auditorium is festooned with flowers and bunting to create a full-on St George’s Day atmosphere — and “full on” is probably a good description of this remarkable piece of theatre.

Expect controversial themes and language, but be assured that the play is deeply thought-provoking and fundamentally life-affirming.

Johnny “Rooster” Byron (Jasper Britton) inhabits a ramshackle caravan in a wood near a Wiltshire village.

Like Robin Hood, he has a coterie of merry men and women who enjoy, or perhaps exploit, his liberal lifestyle and free-flowing booze.

Rooster is a classic anti-hero — flawed as he is, he embodies a celebratory approach to life that has undoubted appeal.

But Rooster’s freewheeling existence is threatened by officialdom intent on halting his anti-social, illegal encampment.

The audience is torn between enjoying the excesses of this Falstaffian character and acknowledging the real difficulties arising from Rooster’s dubious party lifestyle.

Britton takes full advantage of this raucous comedy to portray a sleazy, irreverent Rooster who snipes at society and delivers far-fetched yarns about his past with deadpan assurance.

The supporting cast conjure up enormous good humour through repartee at Rooster’s gatherings. Threads of darker humour emerge as the play tackles some serious and debatable issues.

Rooster’s battle against bureaucracy has a romantic appeal. We might want to champion the non-compliance of this noisy, rumbustious individual, the unorthodox leader of a bunch of hapless eccentrics. The defiant message to live free from constraints is seductive.

But looked at differently, Rooster is an unreliable, hard-drinking hedonist who shirks parental responsibilities and supplies drugs to teenagers.

The audience has to consider the welfare of the young people who are drawn into Rooster’s edgy, squalid way of life. Rooster’s confrontational behaviour inevitably leads to conflict and violence.

The central theme of the play is what it means to be English in the modern day. Jez Butterworth’s script is infused with echoes of Old England — Morris dancers, songs, giants, fairies, customs and legends.

Rooster’s band of hangers-on are fiercely local and we are reminded that to stay local has many attractions.

Lee (Sam Swann) plans to leave for Australia, but strong ties bind him to Flintock village, just as they bind Rooster, who can trace his blood back for generations. Ancient and modern collide as folklore motifs interweave with the world of the internet and smartphones.

There’s a respect for the mystical as Rooster tells us he has “seen a lot of strange things”. The question arises of how we gain a spiritual experience in the modern age.

Ultimately, Jerusalem shows us the mini-tragedies of everyday life, its challenges and disappointments.

He finds that loyalty is flimsy amongst his band of companions and ultimately he is alone in the wood he calls his own.

Jerusalem is a drama of great magnitude showing a magnificent maverick raging against municipal narrow-mindedness.

Rooster’s final soliloquy is compellingly delivered by Britton. Though beaten, bloodied and broken, Rooster persists with his philosophy that to live is to lie, cheat, steal and fight.

Lisa Blair’s direction draws out high-octane performances from all members of this excellent cast, but it is Jasper Britton as Johnny “Rooster” Byron who holds the audience rapt and, for the duration of Jerusalem, he claims the Watermill stage as his own small piece of England.

This exceptional production pulsates with anarchic energy and runs until Saturday, July 21.