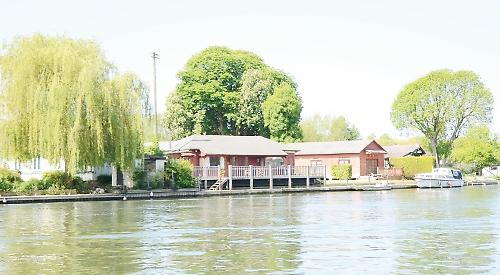 YOU know it’s regatta time when the town is buzzing and draped in bunting, tents line the towpath and Henley’s coffee shop floors are criss-crossed with long bare legs in rowing shorts.

Rowers from all around the country have come to Henley Royal Regatta this week, with 20 per cent of the 565 crews joining us from overseas, and all eyes are on the river.

The course is a straight one mile, 550 yards long and, at the end of this section, the river bends left under the bridge.

Along here, between Mill Meadows and Henley Rowing Club, is an island known as Rod Eyot — home to eight houses and a dream location for all Henley-loving river-going residents and visitors alike.

Syringa is a four-bedroom timber cabin house on Rod Eyot that is on the market with Romans with a guide price of £925,000.

An elevated wooden structure on stilts, the original section of the house features dark wood beams and tiny multicoloured stained glass windows, and dates back to 1924.

Since then it has been extended and developed into a gorgeous, comfortable family home.

I arrived at Syringa’s private car park on the Wargrave Road, to be met and transported over to the island by motor boat.

The family who live there now, Rory and Anu Aurora and their daughter Laxmi, are relocating to a less watery location in Oxfordshire, having owned the property for the last 30 years.

Mrs Aurora told me: “I think the nicest thing about the island is that everybody looks out for everyone else. It’s a very nice community spirit. People have busy lifestyles here but we know that we are dependent on each other, so that works very well.”

Standing on the deck you get an overwhelming sense of space — a blue canopy of wide open sky in all directions, just like being on a boat but without the bobbing.

The living room is a lovely large space to relax in, with heaps of character and wood panelling on the walls, and it leads through to the kitchen.

“This was meant to be the heart of the house, so all the rooms radiate from it and we spend the maximum amount of time here,” said Mrs Aurora as we sat at the kitchen’s own island.

Beyond the kitchen is another reception room, which leads to a fabulous sun room with a vaulted ceiling and a fan and overlooks the garden and river.

Planning permission has been granted for another large room to be added on to the side of the house.

The four bedrooms are laid out along the other side of the property. They are all very nicely presented and of a good size — two of them are en suite and there are two additional bathrooms.

Rod Eyot is accessible only by boat but it is quick and easy to nip across to the riverbank to walk into town or get to the railway station — mooring is free unless you are staying overnight.

When she was growing up here, Laxmi was the only child in her school whose parents did the school run by boat.

She said: “I used to row at Henley Rowing Club. I rowed there for six years and it was so convenient because Mum could in theory have dropped me off at the club. Everything’s so close, it’s great.”

This is a quiet spot in winter, but during the busy summer months Rod Eyot is at the epicentre of the river’s social boating scene.

“The party boats are not allowed on the regatta course, so you see them circling round and round the island — it’s very nice, very festive,” said Mrs Aurora.

“We can see the fireworks from the front decking at the end of Regatta. And at the Henley Festival they have fireworks every night, so we can just stand out there and see it all so clearly.”

Syringa has the benefit of more than 180 feet of private mooring, stretching across the deck at the front and the garden at the back, and there is a boathouse on the grounds that has been converted to living space with an open-plan layout, a kitchen and a bathroom.

The swans glided silently by, ignoring the calls and quacks of the other waterfowl as I got back into the boat to go home after this most enjoyable excursion.

For someone who loves the river at Henley and wants to be as close to it as possible without getting sweaty or wet, you can’t do better than this.