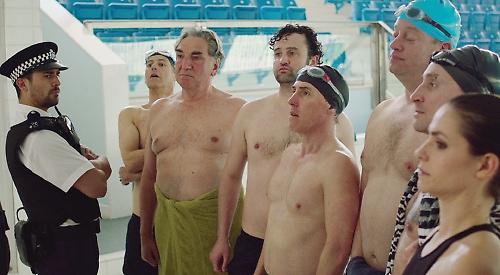 YOU’VE heard of the loneliness of the long distance runner — but what about the mid-life crisis of the synchronised swimmer?

A new comedy starring Rob Brydon is looking to make a splash on the big screen this summer while tackling that very subject.

Swimming With Men charts the progress of an
all-male group of synchronised swimmers.

It is based on the real-life story of a team of Swedish synchronised swimmers and their bid to compete in the World Championships.

Brydon plays the role of Eric, an accountant who is suffering a full-blown mid-life crisis when he meets a group of synchronised swimmers during a visit to his local pool.

Beset by problems in his marriage to Heather (Jane Horrocks), he decides to join up — and finds a surprising brotherhood as part of the motley crew.

Surprisingly for Eric, it turns out that making patterns in a pool can, for a couple of hours at least, smooth out the bumps in his existence. Initially keeping their personal lives in the locker, the ramshackle squad and coach Susan (Charlotte Riley) slowly learn to reveal their inner lives, as well as their paunches.

But can they get their lives and routines in sync as they embark on an unlikely journey to Milan to compete in the world championships?

As Susan labours to whip them into shape, will they master “the flower”, “the pyramid” and “the spinning circle” in time?

More importantly, can Eric win Heather back with the help of his newfound confidence?

Downton Abbey star Jim Carter greatly enjoyed the experience of making the film and said: “If someone is a decent swimmer but thinks doing lengths is a bit boring, it might be worth giving synchronised swimming a go. For a lot of men, the social side is just as important as the sport.”

Or as Daniel Mays’s Colin puts it: “We’re just a bunch of middle-aged men who want to meet up in trunks that are too small for us, and make funny little patterns in a pool.”