Intensity of Faulks’s Flanders cuts through on every level 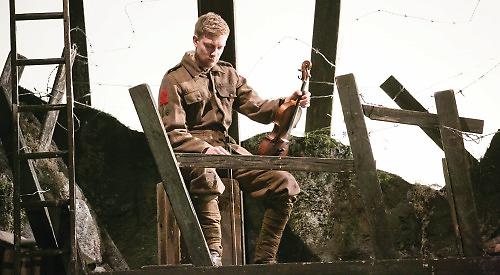 WE’VE had nearly four years of First World War commemorations, so does Sebastian Faulks’s masterpiece, Birdsong, have anything left to tell us? Oh yes!

There had to be a question hanging over this production and the biggest was: could they translate the intensity of the novel on to the stage? Yes again!

Playwright Rachel Wagstaff has played about with the sequence of the novel but that helps rather than hinders — we start in the mud, blood and filth of Flanders in 1916 rather than four years earlier.

It works because the play is 135 minutes of our time, the novel can be taken at a more leisurely pace, and we can decide when to alleviate the intensity if we want.

There are big themes here — about how ordinary people not only raise or lower themselves in the worst of situations, but also the emotional havoc that such a desperate war can wreak.

Families stretched to and beyond breaking point, finding ways to belong and others desperate to share that but not equipped.

And that’s how our not-quite-hero Stephen Wraysford, portrayed sensitively in a desensitised way by the excellent Tom Kay, takes centre stage.

He was orphaned and adopted, so already deeply wounded psychologically, then sent to an expensive school to further his alienation from family and life.

It’s no surprise that he falls for his boss’s wife while on secondment in France before the war. He’s a man in turmoil and always will be. He pours himself on to her in a way which cannot sustain, and doesn’t.

What the war does is bring everyone to his chaotic emotional level with the terrifying disruption and destruction which ripped great holes in our society and through the whole of Europe.

The difference is that those who survive, and most who don’t, have an anchor at home — a wife, girlfriend or family. Wraysford can only cling to an unsuitable lover who left him.

But that’s only half the story, because this is also a tale about ordinary men — not the infantry soldiers so much, but the tunnellers, the sappers who dug beneath the German lines to blow them up. Chief among them is Jack Firebrace, played in a rewardingly nuanced way by Tim Treloar.

He has a strong support network with friends in the army and family back home. But he is thrown into the same flapping emotional gale as Wraysford by the death of his son from diptheria.

This production ranks with the classic First World War plays such as Journey’s End and more recently, though less intense, The Wipers Times.

It’s immensely rewarding as a spectacle and this writer will be hunting out his copy of the novel to reread because it was one of the literary highlights of the Nineties.