Orchestral manoeuvres in the sunshine were most welcome 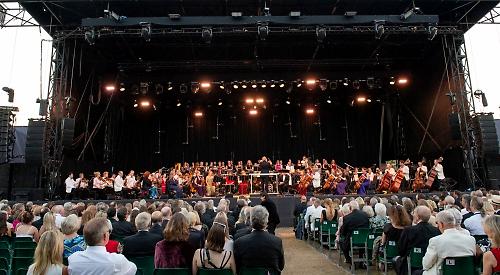 IT had long been mooted that the HSO should perform on the Henley Festival’s Floating Stage and this midday concert was the most welcome outcome.

The stall seating area was virtually unoccupied, giving a completely erroneous impression that the concert was poorly attended. In practice, to escape the blazing midday sun, a substantial and enthusiastic audience had assembled inside the roofed tiered seats behind the stalls.

A very comprehensive sound amplification system made short work of the chasm that existed between players and listeners. But opera glasses would have come in handy.

Unquestionably the highlight of this concert was the spiritual Méditation from Massenet’s opera Thaïs. Min Kym’s lingering and quietly passionate interpretation of this short violin masterpiece can best be described as transcendental. It was accompanied sensitively, most notably by the orchestra’s harpist Zuzanna Oibrys. Audience approval was deservedly ecstatic.

This was followed by Sarasate’s technically-challenging firework display Zapateado, which Min Kym tossed off with deceptive ease. Min then brought us back down to earth with an unscheduled and deeply introspective encore of solo Bach which, in the middle of an intellectually light programme, was received with the hushed reverence and awe that her complete mastery deserved.

Walton’s Crown Imperial will linger long in the mind as the orchestra’s outstanding contribution of the day. It was spacious and dignified, as befits the piece, yet managed to sound also joyful and free from excessive pomp.

With the HSO under its conductor Ian Brown, you know that you are in good hands. Their recent polished performances of Elgar’s Cello Concerto and Mahler’s exacting First Symphony are ample proof of this.

Yet sometimes the orchestra seems to hold back just a tad and the moment of excitement or supreme satisfaction is lost. This was all too apparent among some of the crowd-pleasing numbers offered at this concert where the nature of the event calls for that extra sparkle.

Márquez’s Danzón No 2 offered a particular insight. The wily cross-rhythms in this appealing South American piece have to sound completely relaxed and natural. The limpid clarinet solo from Jeremy Gouldstone started the work beguilingly and the piccolo player Sarah Haynes caught the mood too.

Thereafter the rhythm throughout the piece sounded increasingly uncertain and ill-defined and tempo changes were shaky. There are times when the ebb and flow of rhythm can’t come from the energetic tip of a stick but has to come from the players’ own guts, and they have to feel free to get on with it.

The HSO has already announced its exciting programme for next year’s Henley Festival appearance. But if the sun shines, don’t forget to bring your binoculars.