‘Amazing’ Grace made us believers 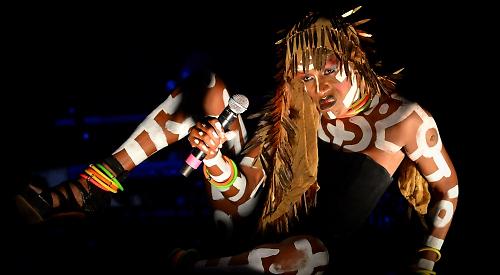 SHE may have been late — a good 45 minutes by my count — but boy did she show up.

As excuses go, Grace Jones telling the Henley Festival crowd “I couldn’t come out until the sun went down — I’m a self-proclaimed vampire” certainly beats “The dog ate my homework.”

She is of course one of the few stars who could get away with such an announcement.

Not so much because she once played a vampire in a film and wrote a song about it 10 years later — which she did — but because there has always been something a tad otherworldly about her.

However carefully curated her image may be in some respects, she is nothing if not a genuine diva — having famously slapped chat show host Russell Harty for turning his back on her to speak to other guests.

But this was a hugely good-natured performance that towards the end saw Jones salute the crowd’s appreciation of her art by telling them: “You’re the best. I thought I was coming here to play to a really boring bunch of people in ties and I’m going to have to jump on their tables and drink their champagne!”

Opening track Nightclubbing was a percussive statement of intent that quickly had the crowd on their feet — where they largely remained for the duration. What followed was a series of career highpoints accompanied by more costume changes than a cubicle in Zara during the Boxing Day sales.

Underneath which was some striking stage make-up that called to mind the sci-fi film Tron and its sequels.

Pretenders cover Private Life was followed by The Normal’s Warm Leatherette, on which Jones joyously banged the cymbals. We were also treated to My Jamaican Guy, La Vie en Rose and an a cappella rendition of Amazing Grace.

But saving the best for last, the visual highlight of Jones’s set came towards the end when she donned what can only be described as a glitterball hat for a stomping version of Roxy Music’s Love is the Drug.

With a multi-coloured laser light zeroing down on the singer’s head, the resulting special effect lit up the entire auditorium for a truly spectacular finale.

There was a bit more to come, of course — starting with a regal procession round the lawn in front of the stage during the first encore, Pull Up to the Bumper.

Riding high on the shoulders of one of her roadies, having donned a striking blonde wig stroke headdress with a massive centre-parting, she high-fived members of the audience who rushed to film her on their phones while a fantastically muscled male pole dancer did his stuff back on stage.

Then it was time for the song we all knew was coming – her 1985 mega-hit Slave to the Rhythm — with Jones reprising her hula hoop routine from the 2012 Buckingham Palace concert celebrating the Queen’s diamond jubilee.

What felt like a good 10 minutes or so later, she practically had to be hooked off — but what a show! Royally bonkers, royally brilliant.