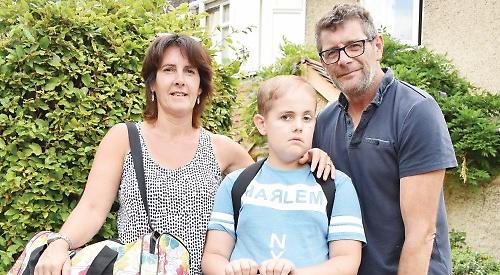 A STREET party raised more than £550 towards a boy’s specialist cancer treatment.

Charlie Ilsley, 11, of Buckingham Drive, Emmer Green, is currently in Turkey with his parents Toni and Mark undergoing CyberKnife treatment for two tumours on his spine. This delivers a high dose of radiotherapy with pinpoint accuracy but the procedure costs £35,000. So far the family has raised more than £16,500.

The fund-raiser on Saturday was held in Marshland Square in Emmer Green and included slime-making and sales of toys, cakes and lemonade. It was organised by Jo Hackett whose children Eloise, 10, and Edward, eight, are pupils at the Hill Primary School with Charlie.

She said her children came up with the idea and it “snowballed”.

“We had so many offers of help, from making cakes for the sale, to lending tables, gazebos etc, and many people who were unable to make it donated anyway,” said Mrs Hackett.

“Many children and teachers from the school came, as did local people who had heard about the sale and wanted to offer support.

“A total of £561 was raised, plus other contributions which were made directly on the gofundme site. We were thrilled to raise such a large amount and hope this shows that although we are now in the school holidays, we are all still thinking about Charlie and his family and what they are going through.”

Charlie has travelled to Ankara because the treatment is not available to children at the John Radcliffe Hospital in Oxford, where he has been treated.

His parents were desperate for him to have the treatment as soon as possible before his condition worsens. Charlie had been in remission since March 2016, a year after having a brain tumour about the size of a snooker ball removed.

But in March the Ilsleys received the news they had been dreading after the tumours on his spine were discovered. Last month another scan revealed they had doubled in size and measured almost 1mm each.

After the latest procedure, Charlie will have his first course of chemotherapy. The family will then have to travel to Turkey several times over the next six months for him have further treatment.

To make a donation, visit www.gofundme.com/cyberknife-treatment-for-Charlie