Wandering through the beautiful trees 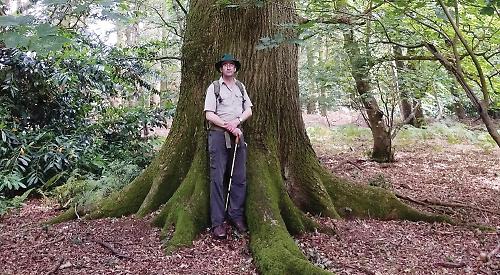 FINALLY, we have had some rain, which provided small respite to our plants and animals, thirsty and hungry both.

To celebrate, my friend and I decide to visit the woods that grace the land between Highmoor and Bix.

Parking up at the west end of Rocky Lane by Padnell’s Wood, we reflect that somewhere within a few hundred yards the extremely rare ghost orchid had been discovered long ago but not seen for many years. What a rediscovery that would be!

Crossing the road and heading north, we follow a public footpath through a field of wheat, as yet unharvested and seemingly unaffected by chemical treatment as there is quite a head of broad-leaved dock growing within the crop.

There are some mature parkland trees here, notably some majestic small-leaved limes (Tilia cordata — cordata after the Latin for heart).

After the end of the last ice age these trees made up the vast majority of the re-colonising forests in these isles. They are not common now but are beautiful to behold. When in flower they are a huge magnet for bees.

These lovely trees tend not to sucker like the common lime, a hybrid with the large-leaved lime (Tilia platyphyllos).

The small-leaved lime can be readily identified by its upturned flowers and furry orangey/red area at the axil, where the leaf stem meets the leaf proper, unlike its close relatives. Entering the wood towards Holly Grove, there are some old rowan trees, their fruit already mature and falling to the ground, no doubt a bonus to woodmice.

The path now takes a right turn and shortly afterwards a switch to the left. There were plenty of our native bluebells here in late May.

The path is well marked by white arrows on the trunks of beech trees and leads to a small pond near the once popular Dog and Duck pub.

Heading east from here, a truly glorious path leads towards Bromsden Farm and Bix, passing some old whitebeams. This area was once named Cardery’s Pightle (pightle being an old name for a small enclosure).

There are patches of heathland here with some healthy gorse bushes and wild basil making an interesting combination. There are plenty of raspberry plants too but there will be no fruit this year due to the dry weather.

Pressing on, we encounter a huge oak. Known as an English or pedunculate oak, this one is a true monster. It must be at least 100ft tall and we measured its girth at 5.11m.

Most oaks prefer a parkland situation but this one has forced its way through its rivals to claim the sky. A magnificent tree.

There is a graceful glade to the left. I feel that I could spend the night here looking up at the stars.

Leaving the woodland and passing some very big old and gnarled silver birch trees, we emerge into open land named Scotland, perhaps because of the old pines that abound here.

A track here leads into a fern-filled woodland named Tartary and, after a short while, from here another path to the right leads steeply up to Rocky Lane.

Along the path to the narrow road we encounter some very old field maples and a truly ancient crab apple. It is hollow with a woodpecker’s nest hole in its trunk.

After navigating the remainder of this right of way with some unnecessary barbed wire to one side, we gain the lane and return to the car. We met not a soul and the birds were silent but they will be singing again come September.