Debbie opens flats for elderly... and says ‘I want one’! 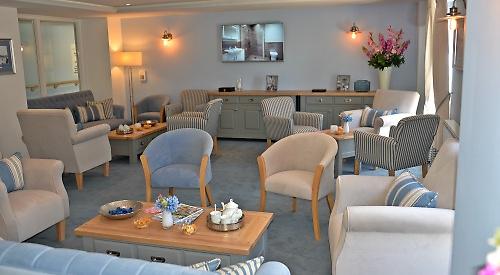 DEBBIE McGEE was the guest of honour at the opening of the Albert Court assisted living complex in Henley.

The broadcaster and widow of magician Paul Daniels, who lives in Wargrave, cut a ribbon at the four-storey building on the corner of Reading Road and Mill Lane.

She was then given a tour of the development by representatives of developer McCarthy & Stone and YourLife Care and Management, which will provide care services to residents.

The complex comprises 54 self-contained “extra care” flats, all of which are being sold to buyers aged over 70, and has a team of nursing staff to help those who need it.

The flats have either one or two bedrooms and are being marketed for between £400,000 and £600,000. The communal amenities include a hair and nail salon, a “wellness” suite and a lounge and restaurant.

The entrance hall is decorated with memorabilia from Henley Royal Regatta, including a number of framed programmes and stewards’ enclosure admission badges from the past 20 years.

McGee, 59, said: “It looks fantastic and I wish I was old enough to buy a flat! I’ve looked around quite a few developments like this but they’re nowhere near as good.

“This is more like a hotel and I’m amazed at all the extras on offer. You get benefits like a beautiful garden without having to look after it yourself.”

Eleven flats have already been reserved and the first residents will move in next week. Sarah O’Donoghue, sales executive for McCarthy & Stone, said at least 75 per cent of prospective buyers were from this area.

She said: “We’re seeing mostly people from Henley, Caversham, Sonning and places like that. It’s either local people or those who have family in the area and want to be nearer to them.

“A lot of people have just wanted to look around but that’s fine. We want to get the word out and make it clear that we’re not a care home, although we have care facilities. It appeals to people who need to live somewhere that’s lower on maintenance.”

The development, which has been built on the site of the former Jet petrol station and National Tyres garage, caused controversy as the land was earmarked for 55 ordinary flats in the Henley and Harpsden neighbourhood plan.

Town councillors argued this would tackle a shortage of housing for Henley’s young people while a complex for older people would attract buyers from further afield.

Visitors at the launch included Sharon and Roger Palmer, of Lime Court, Henley. The couple, who are in their seventies, moved to the town from Sonning Common in 2011 and now want to downsize again.

Mr Palmer said: “We’ve reached an age where we’re thinking about our future as we’ve got two flights of stairs and need something easier to manage. I’m sure this will appeal to lots of people our age in Henley.”