Should we be concerned about old graves being moved? 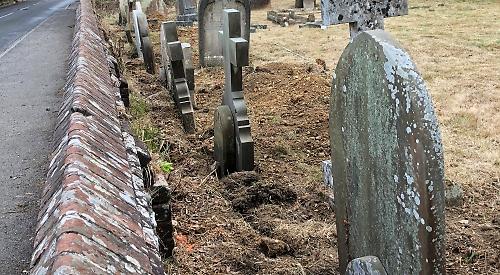 Sir, — Once upon a time digging up gravestones and damaging them would end up in a prosecution.

Here at St Paul’s Church in Highmoor Cross, builders have been clearing part of the graveyard as part of a conversion of the church to a dwelling.

Their enthusiasm for their work or lack of care seems to have got the better of them as a number of gravestones has been damaged.

Several dozen have been pulled out of the ground, or broken at ground level, presumably with a sledgehammer, and
re-sited in a row a foot from the church wall.

This is still, as far as I know, a Grade II listed building. Hopefully someone will keep a closer eye on this. — Yours faithfully,

Sir, — I’m writing to you about a sad case of gravestone demolition at Highmoor Church.

This lovely little church, which is Grade II listed, has been sold for around £4 million to be converted into a house.

There are some very old gravestones there and some that aren’t that old and still visited by family.

I was walking past the church and saw that loads of the gravestones have been ripped up with a digger and thrown in a pile. A trench has been dug right through where the gravestones sat. I’m no expert but I believe you are not allowed to just dig up old graves.

I spoke to someone who lives in the village who said all the soil that had been dug up was put in a pile and taken away by a grab lorry.

It would be great if someone could investigate. — Yours faithfully,

Stuart Rumsey, of planning agent RDP Architects, responds: “We are acting for the new owners of the Church of St Paul at Highmoor Cross.

“Planning permission for change of use to a dwelling and listed building consent have been granted by South Oxfordshire District Council. Applications for the discharge of conditions attached to those approvals are currently being determined by the council.

“The relocation of headstones has been agreed by the Diocese of Oxford and, with some few exceptions (War Grave Commission headstones, for example), it has been agreed that headstones may be lifted and relocated to be against the front boundary wall.

“Most of that work has been carried out and we would say in a most careful manner.

“With stones of this age, often quite delicate, it is clear that they have been lifted with great care as there is very little damage evident.

“It is certainly the case that sledge -hammers were not used as a single blow from a sledge hammer would have been sufficient to destroy most of these old stones.

“It is probably worth noting for your readers that the diocese stated that it would have been happy for the headstones to have been laid as paving slabs but the owners felt that would not have been in the best long-term interest of the headstones nor would it have been truly respectful to the deceased and their families.

“Replacing the headstones, along the front wall, will enable interested parties to still see the stones and their epitaphs etc. I hope this information is sufficient to allay any worries local residents may have had.

“It should be noted that the new owners are very sensitive to the needs of this listed building and its heritage.”