Boy flown to Turkey for cancer treatment unavailable at home 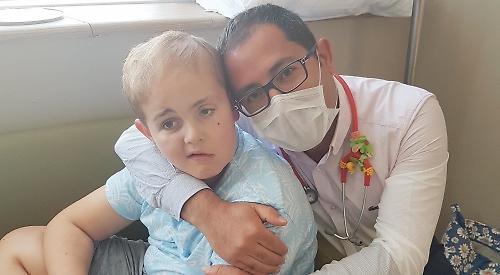 A BOY has begun specialist cancer treatment in Turkey which could save his life.

Charlie Ilsley, 11, from Emmer Green, flew to Ankara with his parents Toni and Mark to undergo CyberKnife treatment in an attempt to eradicate two tumours on his spine.

The treatment, which is the latest in radiotherapy, is not available to children at the John Radcliffe Hospital in Oxford, where he had surgery previously.

Charlie underwent tests and scans at Ankara Memorial Hospital before his treatment began.

CyberKnife delivers a high dose of radiotherapy with pinpoint accuracy and he will have six doses at a rate of one per day.

Speaking from Turkey on Monday, Mrs Ilsley told the Henley Standard: “Charlie’s fine and has had four lots of CyberKnife so far with two more to go.

“The doctors are treating the two tumours three times each — the one at the top of his spine one day and the lower tumour the next day — so the treatment takes six days.

“They made him a plastic face mask which is pinned on to him to stop him moving. Each CyberKnife treatment is only five minutes, painless and quick.

“The only trouble is he’s on steroids to stop the inflammation of his spinal tissue caused by the treatment and these have made him angry and tearful.”

Charlie will begin chemotherapy next week and has had a “port” fitted in his chest where the drugs can be delivered.

The family are expected to stay in Turkey for at least another two weeks.

Mrs Ilsley says she would have preferred for Charlie to be treated in Oxford but as that was impossible, she had no option than to go abroad as soon as possible before his condition worsened.

Mrs Ilsley said: “I just want to say thank-you to everyone who is making this journey possible and that I will do everything I can to change the way our children receive treatment at home.

“This treatment is not available to children on the NHS but it could save Charlie’s life, so it’s a chance.

“I feel like I needed to act now while Charlie’s still well. For me it’s a case of saying ‘okay, we fight again’. My family have been brilliant — everyone is fighting for Charlie.”

Charlie, who is due to start at Highdown School in Emmer Green next month, first showed signs of being ill in March 2015 when he started being sick in the mornings.

After a CT scan, doctors discovered a tumour in the back of his brain about the size of a snooker ball. Another tumour was found on his spine.

He underwent a 10-hour operation in April that year in which his brain tumour was partially removed. Doctors said that without the surgery he might have had only weeks to live.

He then underwent 31 sessions of radiotherapy to his head and spine at the Churchill Hospital in Oxford.

This was followed by months of chemotherapy before he was given the all-clear in March 2016.

But in March this year the Ilsleys received the news they had been dreading after the two tumours on his spine were discovered.

A scan taken in July revealed they had doubled in size and measured almost 1mm each. Further radiotherapy treatment has been ruled out so the family opted for CyberKnife.

The treatment involves X-ray cameras that identify the position of the tumour and sensors that monitor the patient’s breathing.

This enables a robot to position the radiotherapy beam correctly in order to minimise damage to healthy tissue.

The beam moves with the patient’s breathing and can track a moving tumour.

Because of its accuracy, it allows larger doses of radiotherapy to be delivered, minimising the number of times the patient needs the treatment.

Mrs Ilsley said: “It’s not an experimental treatment, it’s what they use for other children. We said we weren’t going to give up on him when there was treatment available.”

Charlie will have to return to Turkey with his family several times over the next six months for further chemotherapy treatment.

To make a donation towards Charlie’s treatment, visit www.gofundme.com/cyberknife-treatment-for-charlie