Homage to Sherwood Forest outlaw brings the outside in 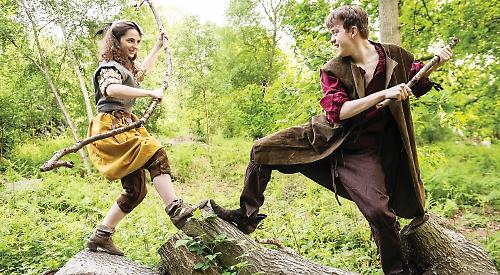 WHILE for this summer extravaganza, director Tristan Pate’s show remained within the confines of South Hill Park’s Wilde Theatre, without venturing into the grounds, somehow it still felt as if we were back to nature, as if they’d brought the outside in.

Harking back to times when humanity was more at one with the flora and fauna, able to subsist in the forest and harness its strengths, the players took us on an enjoyable romp, with tug of war games, wishes bound by tree leaves, contemporary musical numbers and some wonderfully choreographed dances around a Maypole.

Ever inventive with the stage layout and its surrounds, with the action taking place in the centre and us the audience wrapping around the four sides, this was theatre in the round akin, I’d imagine, to Shakespeare’s Globe, and helped create the feel of stepping into past times. The actors did a great job of ensuring that every corner of the room felt addressed.

This was a show within a show, as the actors took their turns to bring us the characters we know and love — Maid Marian (Tabitha Baines), Guy of Gisbourne (Alex Daykin), the Sheriff of Nottingham (Heather Wilson), Allan-a-Dale (Sam Gillett), Will Scarlett (Jessie Harding), Little John (Amber Lilly Payne) and hilarious cheeky rogue Friar Tuck (Neil Hodgson) among others — while Robin Hood was played by various people (chiefly Sam Gillett, Luke Burton and Alex Daykin) in a manner that never left you in any doubt as to who was Robin.

The cast built up a great momentum, and with the aid of a movable podium and lots of tree branches, a magical illusion of a river and sticks and swords, this was lively, engaging and immersive, with little touches of audience participation.

There was some great interaction with the kids from the audience immediately after the interval, followed by some tricksy archery, while the kids in the show brought in some lovely comic moments.

With references to the local areas of Bracknell Forest (although we were told quite clearly “This is not panto!”) we felt in the know, and fun was poked at corrupt bishops and the hapless people wanting power, redistributing, of course, their ill-gotten gains back to the poor.

This was a great swashbuckling treat to take the kids to this summer — my two were mesmerised.