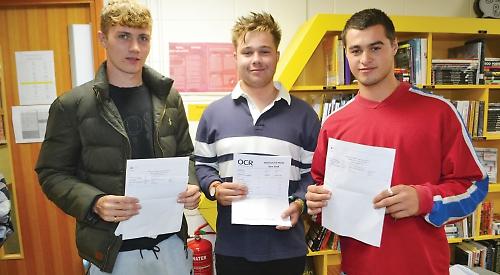 At Shiplake College, the percentage of grades at A* to A was 42 per cent, down from 51 per cent last year but higher than 2016.

The average number of UCAS points achieved by students across all qualifications was 129, equivalent to A, B, B grades. There were also 100 per cent pass rates at A* to C grades in art, computer science, design and technology, philosophy, PE and photography.

Megan Tooley, 18, of New Street, Henley, got Bs in psychology and photography and a C in English. She is now going to Oxford Brookes University to study primary education and hopes to be a teacher.

She said: “I’m very pleased now but I was very nervous. We are going out to celebrate and won’t be drinking our sorrows away any more!”

Brad Wilkins, 18, of Newbury Close, Charvil, got two BTEC distinctions in business, a B in photography and a C in media studies. He will start an apprenticeship in marketing and advertising while running his own social media advertising business.

He said: “I was feeling content until last night when the nerves started kicking in. We are all celebrating by going on the Ale Trail in Henley tonight.”

Headmaster Gregg Davies said: “We are proud to be an all-ability school and despite the more demanding examinations and government reforms, these pupils will be leaving school fully equipped for the next stage of their lives.

“I am impressed by the variety of degree subjects and university destinations our leavers are going on to, with a small number choosing to pursue degree apprenticeships or go straight into employment.

“My thanks to the interminable commitment of my colleagues whose hard work and care does not go unrecognised.”

At Queen Anne’s School in Caversham, 40 per cent of grades were A* or A, up four per cent on last year, while 89 per cent were A* to C, a three per cent increase. The pass rate dipped slightly to 99 per cent.

Forty-three per cent of girls at the independent school studied science, technology, engineering and mathematics, or STEM, subjects and 44 per cent of grades in these areas were A* or A. Every girl who undertook the extended project achieved grades between A* and B.

Yasmin Hatton, 18, who lives in Shiplake with her parents Jill and Keith and brother Ben, who is a year older, got A*s in history and art and an A in English and will be studying history at Durham University.

She said: “I was pretty nervous this morning so more than anything else it’s a relief to know I’ve done well. You can never be sure how you’ve done after finishing the exams so it’s just a case of waiting but everyone I’ve spoken to is happy with their marks.”

Georgina Evans, who lives in St Mark’s Road in Henley with her parents Sally and Jonathan and siblings Benedict, 20, and Lucy, 17, got three As in biology, physical education and English literature and will be going to Cardiff University to study physiotherapy.

The 18-year-old, who is one of the school’s two head girls as well as tennis and lacrosse captains, has played the latter for England and has always wanted to pursue a career in sport.

She said: “I’m over the moon with the result — it was a shock, but obviously a good shock. I’m usually quite a relaxed person but this morning it’s fair to say there were quite a few butterflies in my stomach.

“My parents are really pleased and I think most of my friends are really happy with how they did as well. I’m particularly pleased with the PE result but I enjoyed all three subjects and couldn’t say which was my favourite.”

Katie Green, of Harpsden, will be going to study at Yale University in America, where her mother Elizabeth’s family is from, after scoring a B in history and economics, which she will major in, and a C in biology. She had already received an unconditional offer from the university and will be joining its rowing team after representing her school and the GB under-23 team in the sport.

Katie said: “My goal was simply not to fail but I feel I’ve done really well and am excited about going to university. I’ve been rowing for a year-and-a-half and really love it so I was drawn to Yale as it has an excellent reputation for that.”

Headmistress Julia Harrington said: “It’s an excellent set of results and the girls should be exceptionally proud. This year in particular, we’ve seen a coming together of the academic and vocational aspects of education.

“The girls are achieving top grades and going on to study a wide range of subjects, with 29 per cent studying STEM subjects, which has always been a strength for us, alongside music, the liberal and performing arts and courses linked to industry.”

At Reading Blue Coat School in Sonning, 44.4 per cent of grades were in the A* to A range, a decrease on last year’s record of 48.3 per cent, while 93.8 per cent were between A* and C, a decrease from 96 per cent. The school once again achieved a pass rate of 100 per cent.

High fliers included Jamie Rowe, who will be studying natural sciences at Robinson College, Cambridge after getting A*s in chemistry, maths, further maths and physics. He follows in the Oxbridge footsteps of his father Philip, the school’s former academic deputy head, who studied at Oxford.

Headmaster Jesse Elzinga said: “It is pleasing to have such impressive statistics again, which demonstrates the tremendous academic progress the school has made over the past five years.

“But more important than the numbers are the many success stories of the pupils. It is wonderful to see the success at the top end, as well as a range of pupils performing to the best of their ability.”

The number of A*s or As was 40 per cent at The Oratory School in Woodcote, a three per cent improvement, while the number of A* to C grades was 75 per cent and the pass rate increased from 97 to 98 per cent. Two boys got three A* grades, Harry Davies, of Goring, and Sai Muvvala, of Slough.

Harry, 18, who lives in Wallingford Road with his mother Emma, father Chris and brother Ollie, 21, studied maths, chemistry and biology and will be studying medicine at the University of Sheffield.

He said: “It feels very surreal because I wasn’t expecting to do that well. I needed three As to get in and thought I might pick up one A* if I was lucky so I’m overjoyed. I always felt like I was on track with my studies but you can never tell how it will go on the day.

“I was always considering a medical career and fully committed to it after doing work experience at the Royal Berkshire Hospital when I was in year 11.”

Headmaster Joe Smith said: “Seeing the joy on Harry and Sai’s faces when they opened their results made it all worthwhile but all the boys have done incredibly well.

“I’m proud of them and the teachers who have worked hard to help them achieve these great percentages.”

Girls at The Abbey School in Reading were celebrating a record achievement with 64 per cent of entries at A* to A grade, 98.5 per cent at A* to C and a 100 per cent pass rate. All grades for mathematics were in the A* to A range while 90 per cent of girls got A* or A in philosophy.

This follows the school’s International Baccalaureate results in which almost half of the girls who sat it scored 40 or more points out of a possible 45 while two got full marks.

St Helen and St Katharine in Abingdon also had a 100 per cent pass rate but with 74 per cent of entries achieving A* to A and 93.5 per cent A* to B with a total of 92 pupils sitting the exams.

Two students from Henley were among this year's high-fliers.

Lara Ratcliffe got A*s in biology, chemistry, maths and the extended project while Eleanor Halls got an A* in biology and As in chemistry and maths. They will study medicine at the universities of Southampton and Leeds respectively.