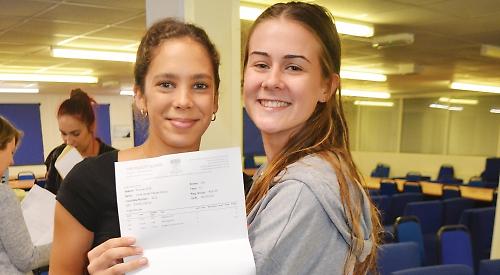 SCHOOLS and colleges in Henley, South Oxfordshire and Berkshire are celebrating another strong year of A-level results.

Some reported an increase in the number of top grades, which were published at 8am on Thursday last week, despite the introduction of a new “linear” syllabus.

This has a greater emphasis on examinations over coursework, no AS-level at the end of the first year and courses are no longer divided into modules.

Other schools and colleges either maintained their standard or experienced only a slight decrease.

At The Henley College there was a slight drop in A* to C grades, down to 73 per cent from 75 per cent last year and the two years before that.

There was a 98 per cent pass rate compared to 98.2 per cent last year, while the proportion of A* to A grades was 18 per cent.

Photography was the top performing subject, with 20 students achieving an A* grade and more than 85 per cent getting A* to B grades. Overall, 24 subjects out of 40 on offer got a full pass rate and there were 15 in which more than 80 per cent of grades were between A* and C.

Some students visited the college’s Deanfield Road campus to open their envelopes and share the news with their friends but most stayed at home due to wet weather and looked up their results online.

Among the top performing students was Isabelle Wood, 18, from Nuffield, who achieved A*s in maths and further maths plus As in biology and chemistry and will now go on to study medicine at the University of Southampton.

“I’m really pleased as I wasn’t expecting to get an A* in further maths and had given up on the subject,” she said. “The college’s maths department really helped me and I’m very excited about going to Southampton. I’ve always had an interest in medicine and wanted to pursue it even though I knew it would be difficult to get into.”

Kate Church, who lives in Henley, got A*s in maths, chemistry and biology and will be studying ecology and conservation at the University of Exeter. The former Valley Road Primary and Gillotts School student is a keen nature photographer and produces her own travel videos.

Cameron Ellis, 18, from Caversham, won a place to study physics and astronomy at the University of Bath after achieving As in maths and further maths plus a B in physics.

“I was hoping for better results but I’m so happy to get into my first choice,” he said. “I was debating whether to come into the college to get my results as most people I spoke to didn’t want to come and get them.”

Tom Hubbard, from Woodcote, got As in geology, biology and geography as well as a C in chemistry. He will be studying geology at Imperial College in London and was inspired by his studies at Henley to pursue the subject.

The college, which is Oxfordshire’s only state institution that offers geology at A-level, was set to axe it this summer to save money but Imperial and the University of Oxford agreed to “lend” members of their staff to keep it going.

Tom, 18, said: “I’ve accepted my offer and will be commuting up to London. Geology is a fantastic subject which involves all of the sciences — a bit of physics, chemistry and biology.

“I was really pleased with how I did because I was predicted four Bs. Our whole geology class is going out to celebrate later.”

Romilly Hryczanek, 18, from Caversham, achieved As in maths, chemistry and biology and a B in English literature. She plans to have a gap year and travel in Canada then study chemistry at the University of York.

Romilly said: “I chose chemistry because it was my favourite subject at A-level. The results were about what I was expecting but I am thinking about having the English result reassessed.”

Athanasios Metaxas, 18, from Emmer Green, scored an A in maths and Bs in government and politics, drama and theatre studies while Morgan Zolkwer, 18, from Henley, will begin studying psychology at the University of Sussex next month after getting B grades in psychology, PE and business.

“Psychology was my favourite subject so I chose it for university,” Morgan said. “I’ll be going out with my friends to celebrate.”

Satwant Deol, the college’s principal, said: “We are absolutely delighted with our students’ results, particularly as they are mostly completing the new and harder linear, two-year A-level examinations.

“I would like to thank all our staff for their professionalism and dedication in teaching, guiding and supporting our students to achieve these excellent results.”

The overall pass rate at The
Piggott School in Wargrave was 99 per cent, the same as in 2017, although the proportion of grades at A* to B dropped to 60 per cent from 63 per cent last year.

The percentage of A* to A grades was 29 per cent while the share of A* to C grades was 83 per cent, down by one per cent.

The school scored 37 points per A-level entry under the Qualifications and Curriculum Authority system, a standardised measure for both academic and technical subjects, which was one less than last year.

In vocational exams for applied general qualifications, the pass rate between distinction star and merit was 86 per cent, with every student passing their course. In technical subjects, 94 per cent of grades were at distinction star level.

Annie Pascall-Ramiz, 18, of Victoria Road, Wargrave, got As in geography, which she hopes will allow her to study at the University of Birmingham, as well as psychology and English literature.

She said: “I’m over the moon as I was extremely nervous. It’s unbelievable and I wasn’t expecting anything near this so I’m really happy. We’re all going out to celebrate and I’ll also be seeing my family.”

Alfie Thain, of Vale View in Charvil, got an A* in art, a B in maths and a C in biology. He is planning to take a gap year before studying nutrition and dietetics at the University of Surrey.

The 18-year-old, who is a school captain, celebrated by going to a concert in London by the rock band Slaves. He said: “I’m happy with my results, especially maths as I was told I’d get a C. I tried my hardest. I am planning to work a bit and save up some money as well as maybe travelling.

“I want to research my degree and find out more about it because it’s a lot of money and I want to be sure I’ll enjoy it.”

Tom Orpwood, 18, of Twyford, got an A* in biology and As in chemistry and German and will now be going to the University of Leicester to study medicine.

He said: “I’m so relieved and excited. It’s been a tough year so to get here now and have it all done and sorted is such a relief. I was super nervous but I knew I’d got in because I’d checked the UCAS website. Before that I was insanely anxious.”

Matt Rawlings, 18, of Twyford, got three As in geography, economics and biology and a B in PE, which he hopes to have upgraded to an A. He is now going to study sport science at Birmingham.

He said: “I had an unconditional offer so it was a little bit laid back. I could have worked harder but I’m still very pleased with my results. I thought PE would be my A and the others would be Bs but I’m still happy.”

Headteacher Derren Gray said: “I am pleased with another outstanding set of A-level and vocational results. Our students and staff work exceptionally hard and this is once again shown in each of our academic, applied general and technical results.

“I wish all our students the very best for their future and thank all the teaching and support staff for their continued dedication and professionalism.”

At Highdown School and Sixth Form Centre in Emmer Green, 28 per cent of grades were either A* or A while 81 per cent were between A* and C, an increase of four and two per cent respectively on last year, while the pass rate was once again 99 per cent.

Headteacher Rachel Cave said: “We’re seeing some phenomenal levels of achievement once again, to the point where we’re seriously wondering how much better it can get.

“We’re absolutely thrilled, particularly as it’s strong across the board in terms of both the arts and the sciences while economics has also done really, really well. There’s talk of university clearing being a ‘buyer’s market’ this year but we’ve barely used it at all while many of our students have pushed themselves to get the best possible result rather than just accepting the first unconditional offer.

“Nationally, early indications are that students’ grades of C or above have dropped or remained at a similar level so to have gone up against maintenance would be terrific.

“Pupils tell me our teachers always gave them detailed, individualised feedback so they knew exactly what level they were performing at and what they needed to do to improve.

“Our culture encourages students to treat college like a job. They’re always studying in free time rather than cruising through lower sixth and trying to cram everything into the final months. It’s the first time we’ve had heavy rain on results day but it’s certainly not matched by the sunny mood here this morning.”

Unlike in previous years, Oxfordshire County Council said it could not give an early indication of the county’s pass rate because it had not yet received the necessary data from all schools.

It said the figure would be subject to change because of re-assessments so it would confirm the final number in October. The pass rate for Oxfordshire last year and the year before that was about 95 per cent.

In Wokingham borough, the proportion of students getting A*s or A was 22 per cent while the number of A* to C grades was 74 per cent, a slight decrease on last year. The council also says it can’t give the pass rate until its schools provide more information.

The pass rate in Reading borough was 94 per cent, a four per cent drop on last year, while passes in the A* to C range dropped from 78 to 77 per cent and those in the A* to B range increased from 57 to 62 per cent.