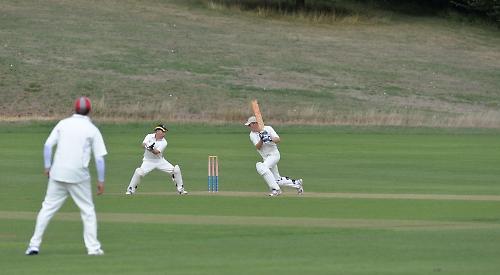 HURLEY’S batting woes continued as they lost to GREAT KINGSHILL by nine wickets in the Premier Division.

On losing the toss, Phil Ridgeway was invited to bat first on a wicket that had not been protected from overnight rain and not surprisingly, the unpredictable bounce made life difficult for the batsmen.

It was all a case of déjà vu for the opening pair of Mike Walton and Imran Arshad, just like last week, Walton played out a maiden from the first over and Arshad fell to the first ball of the second, pushing an innocuous delivery from Ian Talmer to slip.

Yasir Gul made a dozen in his own unique fashion before chipping Talmer to mid-wicket and Hurley soon slipped to 15 for 3 as Talmer picked up his third with a sharp return catch to dismiss Fayyaz Kayani.

The veteran pairing of Walton and Ian Dawkins showed some resistance with a partnership of 30 before Walton gloved down the leg side off Jason Talmer and was well caught by Symons behind the stumps.

Hurley then slipped from 45 for 3 to 51 for 5 as Dawkins (30 runs) and Ridgeway (0) were undone by the bounce, both lofting catches off balls which popped off the pitch.

Jono Patrick (15 runs) and Abdul Jabbar (20 runs) got the score up to 80 runs but the loss of the last four wickets for four runs put paid to an inadequate innings from the visitors.

In order to gain anything from the match Hurley needed to take wickets, but with the pitch drying out and getting easier to bat on, this proved a difficult task.

Hurley were not helped by dropped catches, with Arshad and Walton both guilty. Luke Wright, who remained unbeaten on 62 runs, played like a man in a hurry, smashing boundaries at every opportunity.

The only success for the visitors came with the wicket of Nick Mitchell, who lost his middle stump to a yorker from Kayani.

In Division 1, HARPSDEN 2nds defeated COLESHILL having won the toss on an overcast day elected to bowl.

The Coleshill openers played watchfully against some tight bowling from Birkett and Brooks with the former claiming the breakthrough with a shorter delivery.

Coleshill through Spencer and Shah started to make some good progress mixing solid defence with some strong shots and reached 62 runs before Khaliq bowled Shah with an in-swinging yorker.

Harpsden continued to chip away with Khaliq taking his second wicket and Gulfraz getting Mills stumped with a flighted delivery.

Harpsden then introduced Stevens into the attack who immediately found a perfect pace for the pitch.

In reply, Harpsden openers, Cooper and Raja were solid against some accurate bowling from Scott, punishing the rare bad ball reaching 46 runs before Raja was run out for 17.

Harpsden continued to build through Stevens and Cooper with some strong running and forceful shots until Sahota bamboozled Stevens with a flighted delivery who departed for a well-made 30 runs.

This brought Bevan to the crease, who immediately started to play his shots alongside Cooper who anchored the innings with great skill and concentration. Harpsden reached the target in the 36th over with Cooper not out on 58 runs.

In Division 2, the match between HURLEY 2nds and LITTLEWICK GREEN 2nds ended in a draw.

Anything other than a Hurley win would end their championship hopes and after winning the toss they decided to bowl first.

A tight opening burst from Alex Williams (2-15) and Josh Cole (3-34) soon had Littlewick on the back foot, Williams bowling Simon Fuller and Banerji holing out to Steve Taylor at backward point.

This brought in Mike Duxbury, who hit 96 runs, to join Marcus Hickman, who made 59 runs, and their stand was to prove a match-changing one.

Frequent bowling changes, unsuccessful appeals and dropped catches failed to part the pair until Jeff Dawson provided a moment of brilliance in the field with the assistance of keeper Mike Cole to run out Hickman.

Luke Weston joined Duxbury and they continued in the same vein until a flurry of wickets left them at 226 for 8 after 45 overs.

At this point skipper David Herron realised numbers 10 and 11 were still umpiring so a sporting declaration was made and tea was taken.

As Hurley started their reply, Littlewick Green 1sts brought a full complement of fans to cheer on their club after the early finish of their game.

Abdullah Ali, who hit 80 runs, and Pat Hinnell, opened and were circumspect against the opening attack of Abassi and Weston.

Cole joined Ali and the run rate increased until Cole was bowled by Sethi after a well-made 24 runs.

Father Mike replaced him and was soon into his stride and the pair started to take the Littlewick attack apart while their crowd were getting restless.

From needing more than eight runs an over at one point this was brought down to a manageable six runs until Ali was bowled by Findlay Moore.

Jeff Dawson couldn’t get going and then Steve Taylor joined with four overs to go and 31 runs needed.

Cole finally holed out to an excellent catch at deep mid-wicket and last week’s centurion Scott Taylor hobbled out to the crease with runner Cole in tow.

With three overs to go, 27 runs were needed and some fine hitting and running reduced this to 11 runs from two overs.

However, a tight over from the experienced Simon Fuller meant eight runs were required from the final over.

Scott attempted a straight six but was caught at deep long-off – a few yards straighter and it would have been the winning hit but ended the innings 222 for six and a draw.